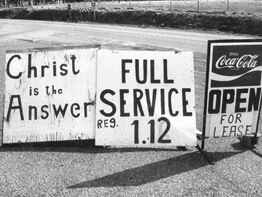 ST. LOUIS – “Bible Road: Signs of Faith in the American Landscape” visually captures what happens when America’s love of commercialism intersects with its deep-rooted Judeo-Christian faith.

The book of documentary photographs is the work of photographer Sam Fentress, a member of Our Lady of Lourdes Parish in University City. It took him 25 years to collect the material and two decades to get his book published.

The 160-page book came out earlier this year from the British publisher David & Charles. For two weeks after Fentress’ Easter interview on a major network’s morning show, his work was the No. 2 best-selling photography book in the country, excluding instructional books.

It is continuing to sell steadily at major bookstores, which can’t seem to decide whether to classify it as art or religion.

Fentress, a 51-year-old graduate of Princeton University in New Jersey and the Art Institute of Chicago, leaves that up to the book chains. He’s just happy they’re carrying it, he said in an interview with the St. Louis Review, archdiocesan newspaper, in mid-August.

He does not consider the book religious per se, though he would have no trouble with people finding it so. “I want the book to percolate in people’s minds and sort of let God do the rest,” he said.

The images he included have a largely Protestant bent, though some are definitely Catholic – like the series on the Hail Mary. None contain anything against Catholic teaching and Fentress said he avoided taking any shots “not in concert with the Nicene Creed.”

Raised a Methodist, Fentress had discarded his faith by his early teens. It was partly because of his search as a young adult for a belief system that recognized objective truth that he ultimately became a Catholic.

Fentress’ “Bible Road” traverses time and place to highlight signs with religious messages found throughout the United States. He culled through thousands of shots he had taken between 1979 and 2006 to select more than 150 images, both black-and-white and color.

His book reveals one way in which religion has survived and thrived over the years in America’s public square. It showcases “roadside evangelization that is peculiarly American,” Fentress said.

The book takes readers on a ride along gritty and edgy city streetscapes, pastoral scenes and suburban highways. His images expose religious messages, often self-created, beautifully scripted or scrawled, tacked on, lit up or painted onto walls, cars, trees, barns, rocks, road signs and other surfaces.

Fentress said he was “fascinated with how people did those things, how they were willing to risk a certain amount of ridicule, being uncool, turning off customers. Of course,” he added, “some might see it as using religion to further commercial ends.”

His wife, Betsy, and their six children, ranging in age from 8 to 19, have played a large role in helping Fentress find some of his book’s subjects. He estimated that about a third of the shots were discovered on family vacations.

One of Fentress’ favorites is a shot he took in 2001. It shows a woman’s head, carefully coifed, on the window of a beauty salon in Suitland, Md. Underneath the illustration is the notation, “Matthew 6:33.” The Gospel verse reads, “But seek first the kingdom of God and his righteousness, and all these things will be given you besides.”

The shop owner, Fentress said, seems to be “sort of advertising against her own product,” which is why he likes it so. “It hits home,” he said. “I quote this one all the time to my kids.”