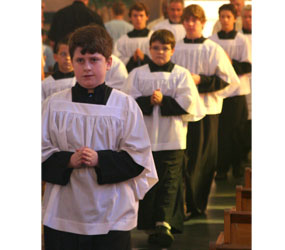 PHOENIX – When the news broke that Father John Lankeit, rector of Ss. Simon and Jude Cathedral, was changing policy on altar servers, secular media outlets were quick to offer their take on the development.

From now on at the Phoenix Diocese’s cathedral, only boys will be altar servers. Girls who are currently serving in that capacity will have the opportunity to train as sacristans.

“There were about five or six girls who were still serving and I called their parents to explain there would be a transition,” Father Lankeit said. “I invited them, told them they are welcome right away to begin training as sacristans.”

The news may have come as a bit of a shock to some local Catholics, but Father Lankeit attributes that to those who are, unknowingly perhaps, more influenced by society rather than by church teaching.

The decision, he said, is a way to honor the God-given dignity of both men and women. It’s also one way to encourage more vocations to the priesthood and religious life.

“If you look around the church – and I’m talking about the overall church – if you look at dioceses, if you look at religious orders and you look at parishes where they have the clear honoring of the distinction and the complementarity of men and women, you see both vocations flourish,” Father Lankeit told The Catholic Sun, the diocesan newspaper.

“And when I say both vocations, I mean to the priesthood as well as vocations to the consecrated religious life.”

He pointed to a parish in Ann Arbor, Mich., as one such example. In 2008, the parish had 22 seminarians, Father Lankeit said. He also mentioned the Diocese of Lincoln, Neb., which similarly reserves altar service to boys and has seen strong growth in vocations to the priesthood.

Father Lankeit understands his decision regarding altar servers may be upsetting to some.

“If the question is approached just from an emotional standpoint, I can understand why people would be upset because they’re looking at it in terms of a question of rights – and they’re interpreting it in such a way that somebody’s rights are being denied,” he said.

The fact is, Father Lakeit said, becoming an altar server is not at all about rights. The same goes, he said, for the priesthood.

“Prior to my ordination, as a single, Catholic man, I had no right whatsoever to the priesthood. And so when I went into the seminary, I was determining whether or not Jesus Christ was calling me to be a priest, but the Church was likewise discerning me and the ultimate decision was the church’s,” Father Lankeit said. “Even if I felt very, very strongly at the bottom of my heart that I was called to be a priest and the church didn’t recognize that, I had to accept that.”

Unfortunately, when the secular world steps in to comment on whether altar servers should only be male, the issue is examined from an emotional point of view, rather than considered in light of the reasons behind the decision, he said.

Father Lankeit pointed to paragraph 47 of the 2004 liturgical instruction, “Redemptionis Sacramentum” (“The Sacrament of Redemption”), promulgated by the Vatican’s Congregation for Divine Worship and Discipline of the Sacrament. The text, he said, confirms something he already knew: The vast majority of men who are priests were once altar servers.

“It is altogether laudable to maintain the noble custom by which boys or youths, customarily termed servers, provide service of the altar after the manner of acolytes, and receive catechesis regarding their function in accordance with their power of comprehension,” the instruction reads in part. “Nor should it be forgotten that a great number of sacred ministers over the course of the centuries have come from among boys such as these.”

While the “Redemptionis Sacramentum” says girls or women may be admitted as altar servers, it leaves the decision to the local bishop’s discretion.

Father Paul Sullivan, director of vocations for the Phoenix Diocese, said that pastors, such as Father Lankeit, must decide what is best for their parish.

Where there is strong formation of young men, Father Sullivan said, there are more vocations to the priesthood. He said that such formation stresses service and avoids a false egalitarianism and false clericalism.

In other words, he said, it’s not about power or competition between the sexes – it’s about serving God and forming young people in the faith.

Father Lankeit said that the decision regarding altar servers at the cathedral is only one of many factors in encouraging vocations.

“Don’t get me wrong – this alone will not be the be-all and end-all of increasing vocations,” Father Lankeit said. He’d also like to establish perpetual adoration at the cathedral.

“It’s a high priority for me and I’m trying to discern how to make that happen here,” he said.