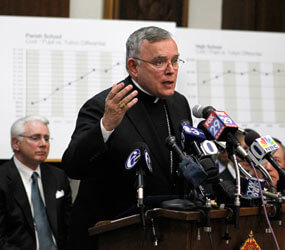 PHILADELPHIA – Jan. 6, traditionally celebrated as Epiphany, represented a true epiphany for thousands of Catholic school parents and students in the Archdiocese of Philadelphia.

On that day, the Blue Ribbon Commission formed by Cardinal Justin Rigali a year earlier, formally presented its final report to his successor, Archbishop Charles J. Chaput. While the scope of its recommendations were not unexpected, it was nevertheless stunning.

If the recommendations are fully implemented, 45 of the 156 mostly parish-based elementary schools will cease to exist at the end of the present school year as will four of 17 archdiocesan high schools.

In the case of the high schools – West Catholic, Monsignor Bonner-Archbishop Prendergast, St. Hubert and Conwell-Egan – it is an outright closing, with the students free to choose any other existing high school. Technically the elementary schools are not closing. They are combining with one or more other schools at another location to form an entirely new school, but in the minds and hearts of the parents and students involved, their school is closing.

The report recommendations were first explained by Blue Ribbon Commission members to pastors, principals and directors of religious education at a morning gathering at Neumann University in Aston.

It was repeated in a shortened version in the afternoon at a packed news conference at the Archdiocesan Pastoral Center.

In a letter sent to all parents and guardians, Archbishop Chaput wrote of the trends that are impacting Catholic education in the archdiocese – declining baptisms, an increase in charter schools and the rising cost of education, which have resulted in higher tuition costs for parents and heavy operating deficits for schools.

Because of this, many of the affected schools were forced to eliminate such programs as art, music, foreign language, library, physical education and technology, among others.

At the news conference, Archbishop Chaput commended the 16-member Blue Ribbon Commission for its work, and said, “I hope the people in the archdiocese join me in thanking them because we owe them a debt of gratitude.”

The commission, he said, “worked very hard to ensure there is a Catholic school alternative for every student affected by this report. It is a critical first step in renewing the health of our Catholic education ministry and in the long term will benefit all of Philadelphia.”

John “Jack” Quindlen, chairman of the commission and a retired senior vice president and chief financial officer of DuPont, said, “Understandably, much of the focus is on school closings, but closings are just one part of a forward-looking program designed specifically to strengthen remaining schools. The commission is confident that if the recommendations are implemented the future for Catholic education in the archdiocese will be immeasurably brighter not for a year or two but for many years to come.”

The commission’s report, titled “Faith in the Future, Sustainable Catholic Education for All Who Desire It,” clearly illustrated why restructuring is necessary. Total enrollment, which peaked at over 250,000 in the 1960s, has dwindled to approximately 68,000.

At this time, there are more Catholic children in parish religious education programs than there are in the schools. As schools shrink in size, despite higher tuitions the parish subsidy grows, with per-pupil cost in the elementary schools on average more than $1,450 higher than tuition charged. In the secondary schools the average is more than $2,000 higher than tuition.

Today, there are 34 elementary schools with an enrollment of less than 200, a figure generally considered a minimum for viability, and 14 of these have fewer than 150. Another 11 schools have more than 200 students, but nevertheless are experiencing a pattern of decreased enrollment and financial deficits.

Under the restructuring, not only the parish schools actually closing are affected. The schools with which they combine will also cease to exist as a parish school, replaced by the new regional school.

In all, restructuring of the elementary schools will affect almost 21,000 children, 1,500 teachers and 85 administrators, according to Mary Rochford, archdiocesan superintendent of schools.

In most cases the combined school will draw a faculty from the schools involved, but Rochford could only guess how many will be displaced, perhaps 250. The high school closings will also affect approximately 200 teachers, she said.

Normal retirement will account for saving some jobs and there will be an across-the-board hiring freeze in all of the archdiocesan schools so that as many teachers as possible displaced by restructuring can be accommodated.

“As an archdiocese we are going to do absolutely everything possible to assist any who lose their position,” Archbishop Chaput said. “Personally, I pledge my support to those who will not be part of the reorganization going forward.”

Unlike the elementary schools, high school teachers are covered by the contract with their union, the Association of Catholic Teachers.

“The association will be working very hard over the next several months to make the transition of our high school teachers to their new schools as smooth and painless as possible,” said Rita Schwartz, president of Local 1776 of the union.

Although the restructuring of the schools received most of the attention, the Blue Ribbon Commission also made recommendations in areas of special education, religious education programs, governance of the schools, advocacy for government support and the creation of a new foundation specifically to raise funds for the endowment of the schools.

Every parish was urged to employ a trained director of religious education, dedicate a specific space to the program, extend the number of hours for study required each year to 40 hours from the current 30, and delay conferral of the sacrament of confirmation until eighth grade.