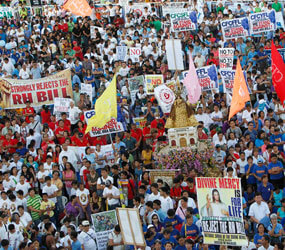 The March 25 rally had the theme “Filipinos! Unite Under God for Life” and coincided with the feast of the Annunciation, which the activists have declared as the Day of Unborn Children.

Pro-Life Philippines said Pope Benedict XVI has sent a message that reportedly includes a special indulgence for those in attendance.

Hours before the rally, sponsors of the House version of the bill withdrew several provisions, including a section that encouraged limiting families to two children.

In a letter to priests, religious and laity of the archdiocese, Cardinal Rosales said the rally was for all those who value family and life values. He urged the clergy and all Catholics to join the event to show “that our country will never allow the repressive bill to be passed.”

Similar activities were also held in other major cities.

Lawmaker Neri Colmenares, a Catholic, said he thought the “silent majority of Catholics” favored the proposed legislation to make individuals responsible for planning their families.

Philippine President Benigno Aquino, who was invited by the bishops to attend the gathering, said he opposes abortion, but added that government officials “cannot close our eyes to the reality of our huge population; that is why the state should address it along with other issues like maternal and child health.”

He said the centerpiece of the government’s policy is the promotion of responsible parenthood, which includes raising the awareness of those of reproductive age about the consequences, good or bad, of bearing children.