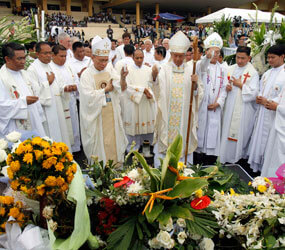 “It is indeed new life that we are praying and asking for in this occasion: new life for those unjustly killed,” Bishop Pabillo said Aug. 31 in his homily during the traditional ninth-day Mass for the dead commemorating victims of the incident. His remarks were reported by the Asian church news agency UCA News.

The bishop also prayed for healing “for those who survived yet are deeply wounded physically, emotionally and psychologically.”

Former police officer Rolando Mendoza hijacked a tourist bus in front of the Quirino Grandstand in Manila Aug. 23 and held hostage 21 Hong Kong tourists and four Filipinos. After an 11-hour standoff, Mendoza and eight tourists were killed in an exchange of gunfire with police.

“Let those who dispense justice do their job well, and soon. This terrible case is also calling out to heaven for justice,” Bishop Pabillo said.

Chinese people are not the only ones “calling for a just and swift investigation,” the prelate noted. “We Filipinos demand the same from our officials.”

Members of the Filipino-Chinese community and Buddhist monks also attended the Mass, which was concelebrated by Bishops Pabillo, two other bishops and a Catholic priest from mainland China.

Hundreds of students from schools and universities in Manila attended the memorial service.