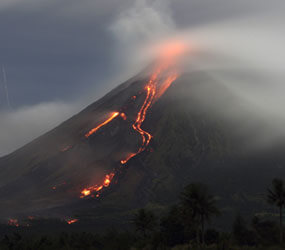 LEGAZPI, Philippines – Church aid workers trying to bring relief to evacuees from the danger zone around the Mayon volcano feared outbreaks of disease as evacuation centers surpassed their limits.

Workers told the Asian church news agency UCA News there was a need for portable toilets, tents and building materials.

“We now have 502 families – 2,288 people – in our school. Of course our classrooms can’t accommodate all of them,” Adelia Vibar, principal of the primary school in the town of San Jose, told UCA News.

“I have only five toilets for all these people. If we are to avoid epidemics we need more, urgently,” Vibar said.

In all, nearly 10,000 families, more than 47,000 people from 32 villages, have been evacuated from their homes around the volcano, which has been spouting ash and rumbling. The government warned an eruption was imminent.

The Social Action Center has begun to focus on the many evacuees from remote areas who have so far received little attention.

Evacuees might not be able to return for up to three months, putting intense strain on infrastructure and resources. Water supplies are already erratic and water was hard to find in some places.

“We have to spend hours fetching water from the pump,” said Amelia Bolanos, 27, a resident of Calabayog village staying in San Jose. “We are very afraid of what will happen to our homes and also for our men who, despite the danger, go to the village during the day to protect our belongings and animals from theft.”

“The wind is blowing ashes toward our village. All our crops are lost and I don’t have any idea how we will recover our livelihoods,” he said.

More than 5,000 people from Santa Misericordia and Fidel Surtida villages were living in small bamboo shelters on just under 10 acres of land.

Venecia Banta, 47, a resident of Fidel Surtida who has seven children, noted the worst part was not knowing how long the families would remain displaced.