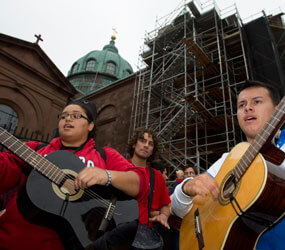 PHILADELPHIA ¬ Archbishop Charles J. Chaput, installed Sept. 8 as the new archbishop of Philadelphia, offered encouragement that members of his new archdiocese will get through the “difficult moment” the local church has endured.

Although rain prevented an outdoor procession at the Cathedral Basilica of Sts. Peter and Paul, it did not dampen the spirits of about 1,700 people, including 400 priests and 100 bishops, who attended the installation Mass.

The Mass took place after days of rain and local flooding, and many in the congregation faced long detours just to arrive at the cathedral in the heart of the City of Brotherly Love.

Outside the cathedral, the struggles the archdiocese has faced in recent months were very apparent. A block away, Catholic high school teachers were picketing during the second day of their strike; in front of the cathedral, while members of the Neocatechumenal Way sang and played guitars and drums, a group of people protesting clergy abuse marched silently, holding aloft signs as a stinging reminder of the recent grand jury report that accused archdiocese officials of failing to prevent abuse of children.

Inside the majestic cathedral though, members of the congregation greeted one another as if at a reunion, and they gave their new archbishop, who headed the Denver Archdiocese for the past 14 years, a warm welcome and long, sustained applause.

The archbishop in turn expressed his admiration for those in the Philadelphia Archdiocese, thanking them for embracing him with “such extraordinary kindness.” He also repeatedly acknowledged the difficulties they currently face and must continue to cope with, without going into any details.

“The church in Philadelphia faces very serious challenges these days,” he said during his homily.

“There’s no quick fix to problems that are so difficult and none of us here today, except the Lord himself, is a miracle worker,” he said. “But the church is not defined by her failures. And you and I are not defined by critics or those who dislike us.”

He told the congregation that what the church does in coming months and years to respond to challenges “will define who we really are.”

He also promised them that “no bishop will try harder to help persons who have been hurt by the sins of the past. And no bishop will work harder to strengthen and encourage my brother priests and to restore the hearts of our faithful.”

He urged Philadelphia Catholics to keep in mind the image of Jesus as a good shepherd ¬ symbolized in the bishop’s crosier.

“All of us should keep that image in our hearts in the months ahead because the Good Shepherd really will bring the church in Philadelphia through this difficult moment in our history to security and joy and a better future,” he said.

Archbishop Chaput, who turns 67 Sept. 26, was ordained as a Capuchin Franciscan priest in 1970 and became bishop of Rapid City, S.D., at the age of 43. A member of the Prairie Band Potowatami tribe, he is the second Native American to be ordained a bishop in the United States and the first Native American archbishop.

A few times during his homily the archbishop likened his appointment to the Philadelphia Archdiocese as “an arranged marriage,” which drew some laughs from the congregation, especially when he said the “Holy Father is the matchmaker.”

He added that the pope “knows in his wisdom that we will make a good family together.”

“For any marriage to work,” he added, “two things need to happen. People need to fall in love and together they need to be fruitful. That’s what we need to dedicate ourselves to today – to love one another and be fruitful together in the new evangelization.”

Archbishop Chaput made special note of the day of his installation, the feast of Mary’s birthday. He said Mary has been “a constant source of hope and protection” in his vocation and hoped that she would also comfort members of the archdiocese “in the midst of the turmoil of the church in our time, specifically in Philadelphia.”