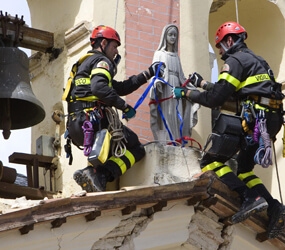 The cardinal delivered his homily in both English and Italian to a congregation that included numerous Italian representatives and dignitaries, as well as family and friends of people living in the earthquake zone.

The cardinal said the Mass offered an opportunity to “pray for the many victims of the earthquake in Italy and to express our desire to be of one mind and one heart with Pope Benedict XVI and the universal church in showing solidarity and support to our brothers and sisters who are suffering so greatly.”

The earthquake, registering a magnitude of between 5.8 and 6.3 on the Richter scale, hit the city and province of L’Aquila April 6.

It was followed by hundreds of tremors, including a handful of powerful aftershocks that caused more buildings to crumble and claimed more lives, putting the total death toll at nearly 300. More than 1,000 people were injured and about 28,000 were left homeless.

Cardinal Rigali urged those present to pray that God will grant eternal life to those who perished and to sustain those in sorrow and with uncertain futures. The cardinal also emphasized the solidarity of Catholics in the archdiocese with those affected by the tragedy and promised his continued prayers.

Giovanni Castellaneta, Italian ambassador to the U.S., and Amato Berardi, a member of the Italian Parliament, attended the Mass and spoke to the congregation.

“Thank you for your generosity and good will for your brothers and sisters in Italy,” said Mr. Berardi, who has dual citizenship in Italy and in the United States and is a member of St. Albert the Great Parish in Huntingdon Valley.

Mr. Berardi was in Rome at the time of the earthquake and felt the tremor. He remained in Italy and visited the site on Easter. Like many of those gathered for the Mass, Mr. Berardi has family in the region.

His daughter, Carmelina, lives 200 miles away in Spoleto, Italy, and the quake knocked pictures off her wall.

Maria D’Angelo, the niece of Aldo and Mariana D’Angelo of Holy Spirit Parish in south Philadelphia, attends college in L’Aquila. The day after the quake, the D’Angelos received the call they were anticipating, telling them their niece was safe, despite the fact that many dormitories were destroyed.

Harry Calandra, president of the National Center for St. Padre Pio in the Diocese of Allentown, said he was moved by the cardinal’s homily.

“The cardinal exemplified true simpatico in his beautiful words,” Mr. Calandra told The Catholic Standard & Times, Philadelphia’s archdiocesan newspaper. “Sharing our love for others is why we came to this beautiful Mass, and we can’t express enough gratitude.”

A reception after the Mass at the Four Seasons Hotel raised funds for continued earthquake relief.

Donations to relief efforts may be made through the National Italian American Foundation on the group’s Web site, https://www.niaf.org/relief/Relief_info.asp, or by sending checks payable to the NIAF/Abruzzo Relief Fund to 1860 19th St. NW, Washington, DC 20009.