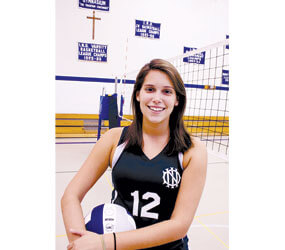 Aimee Petrides is one of 15 women in her extended family to attend the Institute of Notre Dame. Adding to that legacy, Petrides has left her own imprint on the cherished Baltimore high school for young women.

“When I walked in the door, I felt like I was home,” the senior said.

She has a 3.67 grade point average, as a member of IND’s Theresian Scholars honors program. The parishioner of St. Isaac Jogues in Carney is an extraordinary minister of the holy Eucharist, a school ambassador, peer minister and a member of the “Hildie’s Helpers” volunteer organization.

Her busy life has left a large dent on the volleyball court.

On Oct. 11, IND and Maryvale’s varsity and J.V. teams are playing a “Dig Pink” game, an event for the Side-Out Foundation, which works with colleges, high schools and middle schools as they support the fight against breast cancer.

The games will carry a $1 admission and both teams have been selling “Dig Pink” shirts, shoelaces and holding bake sales. School officials said the volleyball program hopes to raise $1,000 for Side-Out.

“I feel like until you’re touched by it, it never hits home,” Aimee said.

Petrides played soccer and basketball growing up, but quickly found that volleyball was her calling during her freshman year. Although she had never played the sport before, the team’s coaches felt her progression would be faster against stiff competition on varsity. She flourished because of curiosity and athleticism.

At 5-foot-11, Petrides shines as an outside hitter and defensive specialist. On the court, Petrides has been an early-season terror. By late September, she had nearly 20 aces, 40 digs and 50 kills.

“I love the energy and excitement that comes with the game,” Petrides said.

She said her team should have a shot at an Interscholastic Athletic Association of Maryland crown.

“It would be awesome,” she said. “We said at the beginning of the year we wanted to put a banner on the wall. It’s going to take hard work and dedication.”