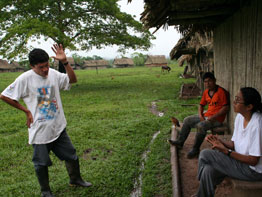 BARRANQUITA, Peru – The knock at Father Mario Bartolini’s door came a little after 8 p.m. April 10. On the porch stood Robert Romero Rios, his face creased with worry and his rubber boots caked with mud.

The previous afternoon, 10 armed guards had arrived in San Juan de Pacchilla, the tiny village where Romero’s family and more than 50 others have lived for more than a generation, in a clearing hacked out of the tropical forest.

“They told me to get out – that the land belonged to them,” he told the Italian-born Passionist priest.

Romero said he replied that the land had been surveyed and the villagers had papers showing that land titles were being prepared. Eventually the guards left.

On the morning of April 10, however, about 15 workers showed up with a tractor, wagon and surveying equipment. They told Romero, who heads an association of community members, that they were preparing the way for contractors hired by a company called Agricola de Caynarachi SA, which plans to turn the land into a palm oil plantation.

The company, owned by the Romero Group, Peru’s largest private business, has negotiated with Peru’s national government to purchase some 7,400 acres of forest in the San Martin region in the country’s northern Amazon basin. The Romero Group owns textile, agriculture, shipping, food and import-export businesses and is part owner of one of the country’s major banks.

Regional government officials say the land deal was not legal and is not yet final, but the company already has built a road into the property and is clearing forest and pressuring small farmers, most of whom lack official land titles, to leave.

The tactics coincide with an effort by the national government to sell deforested, “unoccupied” land in the Amazon basin to companies for reforestation or tree plantations. Most of the deforested land in the Peruvian Amazon, however, is not unoccupied – it was cleared by small farmers, who eke out a living, planting a field for several years, then leaving the forest to take over again while they clear another plot.

The government’s plan, supported by a bill in Congress that has been dubbed the “law of the jungle,” has been criticized by bishops in the tropical lowlands, as well as the presidents of the five Amazonian regions, the Peruvian equivalent of states.

“If the Amazon is important for all of humanity, then humanity must show concern for the people who live there,” said Bishop Jose Astigarraga Lizarralde, head of the apostolic vicariate of Yurimaguas, which includes Barranquita and the communities in the area that the Romero Group is trying to purchase.

The mayor of Barranquita and leaders of more than 20 tiny farming villages in the area met April 8 to decide how to stand up to the company and the government. During a five-hour meeting interrupted occasionally as rain pounding on the tin-roofed building drowned out the speakers, participants voiced their fears and their determination to fight for their land.

“The company doesn’t try to talk with us,” said Walter Huaman of San Juan de Pacchilla. “They cut paths through the wood and say they’re the owners. And they want to throw us out.”

Joyser Lopez Santamaria attended the meeting even though the 70 families in his community, Sanango, are not directly affected yet. He has heard that another company, also owned by the Romero Group, has its eye on their land.

“We want to fight back before they put the knife to our throats,” he said.

“They’re going to take everything away. We’ll end up being peons. And when we get old, we won’t have land” to grow food, he said.

One woman protested that the army was sending soldiers to patrol the land claimed by the Romero Group. Late last year, the governmental Human Rights Ombudsman’s Office investigated claims that soldiers were billeted in the company’s camps.

In December, Defense Ministry officials admitted that soldiers had been in the camps “not exclusively to provide security services to the Romero Group’s workers” but also to “keep subversive groups from trying to re-establish themselves in that sector.”

Although members of the subversive Tupac Amaru Revolutionary Movement trolled for recruits in the area in the 1980s and early 1990s, when most of Peru was wracked by political violence, Father Bartolini said there has been no terrorism or subversive activity around Barranquita since then.

Because only government officials have mentioned subversives, and only since the arrival of the Romero Group, he seeks the talk as a pretext for justifying heavy-handed tactics against the farmers.

Luz Adela Guillen Cornejo, a member of the Missionaries of Jesus, a Peruvian lay mission organization, worries that local teenagers doing their obligatory two-year military service could be forced to take action against their own communities.

“They shouldn’t be preparing these youths for confrontations with their own families,” she said.

The meeting ended with a call for the government to cancel the land-sale contract with the Romero Group. The next day, the mayor and about 30 community leaders headed for the city of Tarapoto – a grueling, five-hour trip that included more than a mile of slogging on foot through mud on a road made nearly impassable by the rain – to take their complaints to Cesar Villanueva Arevalo, regional president of San Martin.

Villanueva admitted that the sale was irregular and said it had not been approved by the regional government.

“We know the Romero Group is causing the deterioration of primary forests, with deforestation and alteration of the ecosystem,” Villanueva said. He told the community leaders that the regional government plans to go to court in April to block the land sale.

Nevertheless, local church workers wonder why the government had not sought an injunction to stop the company from building roads and cutting trees. By the time a legal case winds through Peru’s sluggish court system, it could be too late for the farmers to save their land.

Several community leaders told Villanueva that the church was their strongest ally in the struggle. Father Bartolini, Guillen and other church workers said they are aware their support could put them in the same danger that church workers in the Brazilian Amazon have faced. In 2005, gunmen killed U.S. Sister Dorothy Stang, a member of the Sisters of Notre Dame de Namur who stood up for small farmers who were being displaced by ranchers.

But although they have received threats – and a year ago someone painted slogans on the church wall, apparently trying to make it appear to be the work of a terrorist group – they remain determined to defend the farmers’ land rights.

The struggle is taking a toll. In March, members of a civil defense patrol in San Juan de Pacchilla stopped a company worker and a government official who were surveying land in the community and took them to Barranquita. The two sued 11 people, including Mayor Cesar Soria, Father Bartolini, Guillen, several town council members and other local leaders, claiming they were kidnapped.

The defendants say the two were not held captive, but that they were prevented from leaving town because local residents set up roadblocks. A court ruling is expected soon. Meanwhile, the defendants must make a monthly trip to the provincial capital to sign in with the court.

In Father Bartolini’s view, the land-rights matter is exacting a dual price. Not only are the farmers in danger of losing their land, but the problem has also taken up much of the small pastoral team’s time.

“It’s been three years,” he said. “How many more things we could have done for the people if it weren’t for this.”