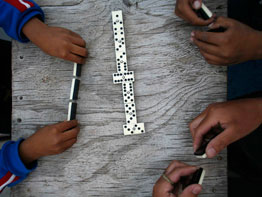 LAREDO, Texas – People are biased against immigrants because they don’t know them, said the director of a migrant shelter in Nuevo Laredo, Mexico.

“If you know them, it changes you. It touches your heart,” said Father Francisco Pellizari, a Scalabrinian priest, who directs Casa del Migrante Nazareth in the border city.

He made his comments in an interview with the South Texas Catholic, newspaper of the Diocese of Corpus Christi, after the Jan. 13 Day of the Migrant (“Dia del Migrante”) Mass celebrated by Mexican and Texan bishops who lead border dioceses.

Casa del Migrante workers and volunteers helped coordinate the liturgy, held on the Mexican side of the Rio Grande and attended by about 400 Catholics from both sides of the border.

“The church is a family without borders,” Bishop Ricardo Watty Urquidi of Nuevo Laredo said in his homily during the Mass.

He said that by virtue of baptism “we have a gift to serve the needy, the poorest. Unfortunately there are more today than at any other time.”

Bishop Watty and the other border bishops met the previous day to discuss common concerns, and immigration issues topped their list.

The Nuevo Laredo vicinity is home to the most vulnerable immigrant population along the Texas-Mexico border, said Father Pellizari. “Here the migrants are very poor; they have nothing.”

Many who end up in Nuevo Laredo have traveled from Central and South America and are poor to begin with. During their journey they are often robbed and taken advantage of by coyotes who smuggle them for pay and commonly hold them for ransom in an attempt to get more funds from their family members, said the priest.

They are then caught up in the violence of Nuevo Laredo, which has become a haven for illegal drug and human trafficking, added the priest. “It’s very difficult for migrants here. They need these houses (shelters), not just to get out of the weather, but for protection.”

The Nuevo Laredo migrant shelter is one of several in a region that includes Mexico and Guatemala that are run by the Scalabrinians, an order founded in Italy in the 19th century by Bishop John Baptist Scalabrini.

Father Pellizari previously directed the Scalabrinian migrant shelter in Ciudad Juarez, Mexico, across from El Paso, but went to Nuevo Laredo two years ago because of the dire situation there. He said in the Ciudad Juarez-El Paso area there were many more services on both sides of the border for immigrants regardless of their legal status.

Casa del Migrante Nazareth, which can accommodate 120 people, operates in conjunction with the Nuevo Laredo Diocese. With support from the diocese, it provides shelter, food, clothing, medical assistance and spiritual guidance. Residents are also required to seek work each day and the duration of their stay there is determined on a case-by-case basis.

The Nuevo Laredo house is the current headquarters for the region.

Father Pellizari said he believes the role of the church “is to let people know the situation of the immigrants.”

Benjamin Galvan, president of the Casa del Migrante board of directors, said it is important to remember that most immigrants do not try to reach the U.S. “because they want to be here.”

His main message to those who misunderstand immigrants is that “they are hard-working people.” They are also the best workers, because of their youth and general physical fitness and because they are used to hard labor, he said.

What drives them to leave is unemployment and insecurity in their homeland. People forget that “they are human beings,” he said.

“Trying to find work cannot be a felony. It is a universal right,” Galvan said, adding that what the immigrant has to offer – family, work and religious values – “makes our societies and our communities better.”