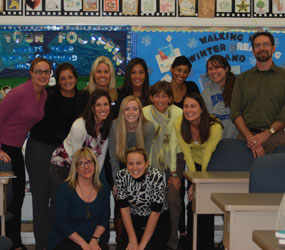 In the fall of 2009, Gwyneth Carmichael was in-between jobs. The former salesperson for the Baltimore Examiner was looking for a change of careers.

“My mother always said, ‘Gwyneth, you need to be teaching,’” Carmichael recently recalled.

The message stuck with Carmichael so much that she began to research programs that fit her needs. She found the graduate external internship program at Baltimore’s Notre Dame of Maryland University.

A year later, she earned a master’s degree and had a job teaching special education classes at Commodore John Rodgers Elementary School in Baltimore City. The program worked.

“They really served as a support system, setting you up with good teachers to work with,” Carmichael said.

Notre Dame’s graduate education internship program started in 2005 and the first three cohorts were a partnership with Baltimore City schools to work in special education. The model continued after that deal ended and expanded to surrounding counties.

Notre Dame usually has about 30 men and women enrolled in the program. The group takes classes for certification purposes together four days from August through May, some spending as much time with each other as they do with their families. Many days are spent in the classroom observing and guiding lessons.

“The basic premise is, to become an effective teacher, you need to spend a lot of time in the classroom working with someone who is an effective educator just as you would as a doctor or any other profession,” said Carol Rabin, coordinator of the program. “That’s really where the field is going. We were looking at a way to take traditional courses and do your student teaching and add a much more intensive internship so there was an application for what was going on in the classroom.”

As those in the teaching profession often do, many of the graduate students make major sacrifices. Because of the time requirements for the program, they spend time that they normally would on a job making money pursuing their dream.

Carmichael was a rarity and waited tables while being enrolled in the program.

The people in the program come from all walks of life. Some were discouraged from teaching early in their lives and are now in their 40s and 50s, ready to pursue their dream. Many specialize in video or art backgrounds. All, Rabin said, want to positively impact young people.

“It’s a very collegial group, very supportive,” Rabin said. “It allows a really interesting flow of ideas from a diverse group of people. It’s an opportunity to learn from everyone else. They bring different skill sets. When they get to the classroom, they bring all these incredible talents with them, which really enhance what they’re doing with kids and engage kids.”

Most choose to do dual certification in either elementary or special education or subjects such as math and science. It prepares them to do work with a diverse classroom.

Rabin believes in the nobility of the teaching profession and through the program and real world experience, Carmichael and her fellow students came to believe it as well.

Now that she’s in her second year of teaching, Carmichael can’t imagine being in another profession.

“It’s the most consuming and difficult job I’ve ever had,” Carmichael said. “It’s also the most rewarding. You see the progress of the students right before your eyes.”