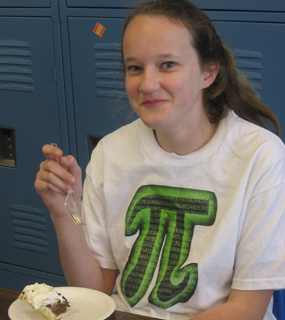 Math teacher Deanna Pichini’s eighth-grade class at Woodmont Academy, Cooksville, marked International Pi Day with songs, T-shirts and – what else – pie! March 14 is recognized by mathematicians and math lovers as “Pi Day” because the numeric date mimics the number representing the ratio of the circumference of a circle to its diameter.

Judi Imel said it’s obvious why God called her daughters to attend The Seton Keough High School in Baltimore, although they live in Howard County. The mother of sophomore Keeley Imel, in remission from brain cancer and “considered a miracle,” attended the second annual Kathleen Bowen Walk for Hope March 4, reported to be an emotional day for the school community.

The event is named for the campus minister who died in 2007 from cancer.

Keeley spoke to express her thanks for the school’s support, as did Shannon Wolfe, class of 2008, also in remission from leukemia.

Because Keeley spent her freshman year at St. Jude Hospital, students chose to donate funds to this organization. They secured pledges for taking turns walking around Gator Circle. Inside, students created books on tape, made crafts and T-shirts and assembled scrapbooks to donate to pediatric wards in local hospitals.

Because the Catholic Center in downtown Baltimore sits on the site of the old Calvert Hall College High School, the school’s class of 1958 is commissioning a memorial plaque to be installed on the outside of the building.

Calvert Hall operated on the site between 1891and 1960, when the newer school opened in Towson, said class member John Doud, a parishioner of the Cathedral of Mary Our Queen, Homeland.

Mr. Doud was designated by the class steering committee to begin the planning stage. The plaque’s verbiage and design will be decided upon mutually, pending approval from the archbishop. It is to be erected in fall 2010.

The robotics team from the Queen of Peace cluster school in Baltimore has been invited to the Mid-Atlantic Robotics Technology Tournament in April and the National Tournament in Texas in May.

Students from Calvert Hall College High School and Notre Dame Preparatory School, both in Towson, raised awareness of the global food crisis by participating in a hunger banquet March 18 at Calvert Hall.
Participants drew lots to experience a meal as low-income, middle-income or upper- income global citizen. Students organized speakers and created a slide show including statistics and photos to educate participants on world poverty issues. Collected funds will be donated to the Calvert Hall Mission Drive.

Students of St. Clement Mary Hofbauer School in Rosedale raised $1,800 for The Leukemia & Lymphoma Society’s Pennies for Patients program to help research cures. Kindergartner Abagail Salisbury donated all the pennies she had been saving since her birth, totaling $33, reported the school.

Their participation reminds students “of the importance of being involved with the community and helping those in need,” said Gary M. Rand II, principal.

The St. Agnes Foundation will honor Francis X. Ryan and Thelma Thomas Daley with the Caritas Award at the foundation’s spring gala at the Maryland Science Center March 28. Mr. Ryan and Dr. Daley serve on the board of St. Agnes Hospital. Dr. Daley is also on the board of the superintendent of schools for the archdiocese, works with the Lenten Appeal, and is a parishioner of New All Saints, Baltimore.

Mr. Ryan grew up in the parish of St. Bernardine, Baltimore.

Each year, the foundation presents the award to two people who demonstrate a lasting commitment to St. Agnes and the entire Baltimore community.

Pete Rogers, who spent 10 years in spiritual ministry at Loyola College in Maryland, is completing his first year as the director of campus ministry at Regis University, a Jesuit college in Denver where he guides nine staff members. Mr. Rogers, raised as a parishioner of Our Lady of the Fields in Millersville, is also remembered by track and field fans as a fine high jumper in the 1980s, for the University of Maryland and Old Mill High School.

PEOPLE PLACES THINGS is compiled and edited by Suzanne Molino Singleton. Items for consideration should be e-mailed to ssingleton@catholicreview.org. Photos must be 300 dpi or higher, but not guaranteed space.