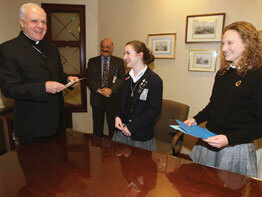 Three Mother Seton School, Emmitsburg, middle school students, Matthew Benjamin, Robin Wivell and Mitchell Swope are among dozens of students selected to participate in the Celebration of the Arts 2009 March 23 at the Meyerhoff Symphony Hall in Baltimore. Middle and high school students from the Archdiocese of Baltimore gifted in art, dance, drama and music will showcase their talents in an evening performance and display. Doors open at 6 p.m. to view art displays, and the performance begins at 7:30 p.m.

Tickets, which cost $25 with a $3 service charge, are available through the Meyerhoff Ticket Office. Call 410-783-8000 or contact Mary Jo Hutson, associate superintendent for archdiocesan schools, at mjhutson@archbalt.org.

The Hunt Valley office of Susquehanna Bank has partnered with Calvert Hall College High School in Towson to bring a bit of color to its lobby. Students donated a selection of paintings on canvas and wood sculptures. By showcasing artwork from a variety of local schools and organizations, the bank hopes to bring attention to the diverse talent within the area.

Deacon Richard W. Montalto, known as Deacon Monti, has been elected to the board of directors for the Center for Pregnancy Concerns. Deacon Monti, who serves at St. Thomas Aquinas in Hampden, actively supports the center and is known around Baltimore as the pro-life deacon. He co-chairs the Maryland March for Life each year in Annapolis.

Heidi Krannebitter, a 16-year-old varsity cheerleader at Mount Carmel High School, Essex, was chosen by the All American Cheer and Dance Association to fly to Honolulu Feb. 1 to perform during halftime at the Pro Bowl during an eight-day trip. Her family did everything they could to raise the money for Heidi, her mother, and grandmother to make the trip. Heidi has been cheering since age 5 and is the second girl from Mount Carmel to have been chosen to perform at this NFL all-star game.

Archbishop Fulton J. Sheen Knights of Columbus Council 7612 announced Jaclyn Hall, Anna Hohl and Drew Clack as the winners in a free-throw competition for boys and girls age 10-14, held at St. Joseph in Sykesville. Winners were awarded basketballs and will advance to the district competition.

Byron Pitts, chief national CBS Evening News correspondent and contributor to “60 Minutes” visited St. Katharine, a Queen of Peace Cluster school, in East Baltimore, while in town to attend the presidential inauguration. Currently writing a book about growing up in Baltimore, Mr. Pitts stopped by the school for a copy of his transcripts and had been asked beforehand to speak to the students.

“How many of you think because you live in East Baltimore,” he asked, “and may not have as much as other people, you are at a disadvantage?” Slowly a wave of little hands went up.

“I am here to tell you,” he said, “that you all have a great advantage and the true secret of success. You will have to work twice as hard to reach your dreams as others … through hard work you can, and will be, successful.”

Mr. Pitts handed each eighth-grader his business card before he left.

“The St. Katharine School community is truly grateful for the blessing of his wisdom, inspiration and the gift of his time,” said Angela Calamari, principal.