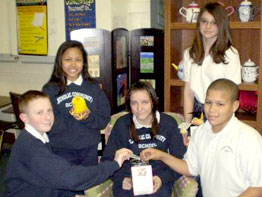 The middle school students of Catholic Community School in South Baltimore recently donated change from their lunches, collected loose change at home, and performed the “chicken dance” in homeroom to raise $20 to benefit Heifer International, an organization providing farm animals and farming education to families in developing countries. The money purchased a flock of chickens for a family and has inspired students to raise additional money for Heifer International to buy a llama for another family. Twenty-five dollars has been collected so far toward a new $150 goal; eighth-grader Gabby Payne is coordinating this endeavor.

Maria Stauffer, a first-grade teacher at St. Joan of Arc School in Aberdeen won Aberdeen Wal-Mart’s Teacher of the Year. She was presented with a certificate and a $100 check to buy classroom materials; the school received a $1,000 check for special project expenses. Mrs. Stauffer has taught first grade at St. Joan of Arc since 1998.

Two St. Philip Neri School, Linthicum, students were winners of the 22nd annual “Champions of Courage” Black History Month Essay Competition. Sixth-grader Kendall Hamlin and eighth-grader Jessie Maes each won a $100 savings bond and will attend an awards luncheon where the top three essayists will be announced. Kendall and Jessie will have a chance to win more than $3,000 in scholarships and cash prizes for their school.

More than 5,600 entries were received representing 90 middle and high schools in Maryland.

Trinity School’s social studies teacher Thomas Lauth presided over the unveiling of a George Washington portrait and U.S. flag Feb. 20 when these gifts from the Mount Vernon George Washington Portrait Project were hung permanently in the second-floor lobby of the middle school in Ellicott City

Seventh-graders Madison Maguire and Matthew Thompson read their historical essays during a ceremony. Madison was the 2009 Maryland second-place winner of the Veterans of Foreign Wars’ Patriot’s Pen Award.

Cadet/Senior Troop 1881 of St. Michael the Archangel, Overlea, traveled to Annapolis to see first hand how government works. Girls from around the state visited legislators and sat in on committee meetings to watch live sessions. Sharing their concerns on behalf of the Girl Scouts of Central Maryland, the girls asked legislators to consider sponsoring a bond bill now before the Senate.

Senator Katherine Klausmeier met with the girls to describe how a bill becomes a law and that persistence is an important ingredient in the legislative process. The senator discussed issues happening right in their neighborhoods which helped to make it real for the Scouts.