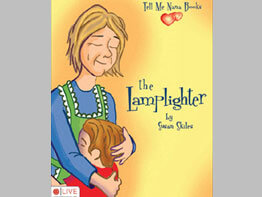 Susan Skiles, a parishioner of St. Bernardine, Baltimore, and St. Bartholomew, Manchester, has published a children’s book, “The Lamplighter,” the first in a planned series of 10 “Tell Me Nana Books” targeted for ages 2-10. With the aim to encourage children to treat others with kindness and compassion, the story offers fresh ideas on challenging children to make good choices.

A grandmother of seven, Ms. Skiles, 54, is “Nana,” both in and outside of her family.

“What a different world this would be,” said the author, “if we could reach our children at an early age, and encourage them to be sensitive, kind and compassionate toward one another.”

The story’s character is a boy named Jonathan, confused because his school friends are being unkind. Nana explains how life sometimes has a way of dimming the light in people, yet if Jonathan’s lamp of kindness stays lit, he can inspire others who perhaps have gone a bit dim.

The real Nana’s love for God, family and friends, children and early morning bike rides inspires her spiritual writing and poetry, she said, as well as her spiritual director, the late Father John A. Delclos, who “always encouraged my writing.”

To order “The Lamplighter,” visit www.tatepublishing.com/bookstore.

Deacon Rodrigue Mortel, M.D., of the archdiocese’s Missions office mailed a Sept. 11 letter to all pastors in an appeal to parishes concerning the catastrophic damages that occurred in Gonaives and St. Marc, Haiti, during three back-to-back storms.

“All crops are under water and all schools are flooded,” said Deacon Mortel in the letter about the sister diocese. “The people are suffering from lack of fuel, food and water.”

Deacon Mortel has remained in contact with his family and friends in Haiti to stay abreast of the dire situation of the “relentlessly battered Haiti … the situation is just lamentable, and hope is fading.”

Only money at this point is being collected and pastors were asked to notify parishioners via pulpit or bulletin in the plea for donations to Missions Office, Archdiocese of Baltimore, 320 Cathedral Street, Baltimore, MD 21201.

Kaylie Gioioso has been awarded a Marion Burk Knott Scholarship to Loyola College in Maryland, Baltimore. This is awarded to one student in the Loyola class of 2012, and is a four-year, full-tuition academic merit scholarship. Kaylie, a 2008 graduate of Notre Dame Preparatory School, Towson, was also a Knott Scholarship recipient during her four years there. Kaylie plans to major in business with a concentration in economics.

Knitting needles and crochet hooks are click-clacking under the nimble fingers of “K2P2 and the Chain Gang” as the Mercy Medical Center, Baltimore, community knitting project begins again. Hats will be knitted and crocheted for premature babies in the Neonatal Intensive Care Unit (NICU). Over the past few years the group, which formed in 2001, has been making hats for Mercy Children’s Health Outreach Project and in 2007 donated more than 250.

K2P2 stands for the knitting term, knit-2-purl-2, and the Chain Gang refers to crochet. Knitters and crocheters include people from around the hospital, male and female. Finished hats will be presented to NICU in December.

Robert Robinson is the new director of marketing and communications for Loyola Blakefield, Towson. The 1999 graduate of Archbishop Curley High School, Baltimore, previously served as communications associate with the American Urological Association and is currently an adjunct professor of English at Stevenson University (formerly Villa Julie College, Stevenson and Owings Mills). Mr. Robinson holds a 2006 master’s degree in professional writing from Towson University.

A blessing and groundbreaking took place Sept. 4 for a new facility called St. Peter at the Lake Center, which will be utilized for weekend Masses and available for family and social functions. Father Donald J. Parson, pastor of St. Peter the Apostle, Oakland, presided over the ceremony at the center’s location, off Mosser Road in McHenry. Construction is expected to begin this month. Members of the building committee were on hand for the groundbreaking, including Bill Schrider, Dianne Monroe, Don Monroe, Dolores Gloeckl, Jack Ward and Ted Hughes.

St. Agnes Hospital, Baltimore, recognized several of its associates at their quarterly Amazing Service celebration. Employees from all areas of the hospital were honored for their service and dedication to patients.

“Their devotion to patients and their commitment to bettering the hospital serves as an example to their fellow employees,” said Yolanda Copeland, senior vice president of patient care services.

Nominated by supervisor and patients, several associates had as many as 20 nominations.

Four outstanding individuals were awarded associate of the quarter: Brenda Mitchell of food service, employee of 42 years; Mark Hall of radiation oncology; Dan Regalado of facilities; and Jennifer Broaddus of the cancer center.

At its annual award event Sept. 11, the Maryland Society of the American Institute of Architects recognized the restoration of the sanctuary of Immaculate Conception, Towson. Murphy & Dittenhafer Architects of Baltimore conceptualized the design for the historic preservation of the 1906 church. The original opulence of the sanctuary was brought back into focus while addressing modern needs. The project included a new narthex, relighting and painting of the interior, a new wood reredos (partition screen), handicapped accessibility, and installation of new mechanical/electrical systems.

Items for consideration for People, Places, Things should be e-mailed to ssingleton@catholicreview.org.