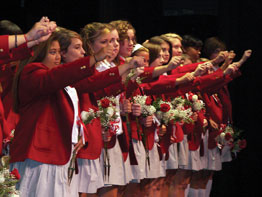 Mercy High School, Baltimore, joined with thousands of teachers, students and hospital caregivers worldwide Sept. 24 in celebration of Mercy Day and the works of the Sisters of Mercy.

Seniors received their class rings in a ceremony they marked as “extra special” as they welcomed one of the original Mercy teachers, Sister Mary Ferdinand Tunis, R.S.M. Sister Mary helped the class of 1964 design the school ring which has been used since.

Seniors ask others to turn their rings 109 times, symbolizing the class of 2009.
Mercy Day commemorates the date in 1827 when Sister Catherine McAuley, foundress of the Sisters of Mercy, opened the House of Mercy in Dublin to provide education and health care to underprivileged women and children.

Madge Franklin, parishioner of Cathedral of Mary Our Queen, Homeland, was diagnosed in 2001with myositis, a mysterious neuromuscular disease.

“It’s a rare disease a lot of doctors do not know much about, if at all,” said Mrs. Franklin.

The Franklin family immediately began fundraising for the Myositis Association.

Three years ago Mrs. Franklin and a group of friends organized a bridge marathon. With 140 women, the group plays bridge once a month for six months a year. They began another round Oct. 6 and will play on Mondays through March. Proceeds each year of around $10,000 are donated to the Myositis Association. Mrs. Franklin and her husband attended the Sept. 18-21 annual conference in Denver. She said this is the only organization to provide support for people with myositis.

If interested in playing in next year’s marathon e-mail Mrs. Franklin at madgie.franklin@comcast.net.

A book written by an English professor at Loyola College of Maryland, Baltimore, Juniper Ellis, has been named 2008’s Best New Book by a Local Author by Baltimore’s City Paper, and was listed as “required reading” by the New York Post.

“Tattooing the World: Pacific Designs in Print and Skin,” was published March 2008 and traces the origins and significance of modern tattoo in the works of 19th- and 20th-century artists, travelers, missionaries, scientists and famous writers. It’s the first book to address the role of tattoo in literature and culture.

Ms. Ellis said 36 percent of young Americans are tattooed. “Clearly the designs are a flashpoint in our culture and a visible way people create meaning and identity.”

The newest ship visitors on the volunteer list at Apostleship of the Sea are Chris Stemmel of St. Leo, Baltimore; Larry, Kathy and Adam Wiley – the first family team – of Our Lady of Hope, Dundalk; and Joseph A. Buccheri, also of Our Lady of Hope.

AOS ship visitors greet incoming crew in Baltimore ports to welcome them, distribute reading material and used clothing, drive them to errands, and sell phone cards for them to contact their families around the world.