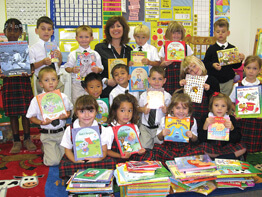 Seventeen kindergarteners in Lisa Macchia’s class at Woodmont Academy, Cooksville, shared their love of reading with underprivileged children in Baltimore by donating nearly 150 new and gently used books to the Begin With A Book campaign. Students chose the book drive as a project to live out their Kids 4 Jesus virtue of the month – giving.

Students brought in books from home and/or purchased new books. Danny Flynn, director of formation, helped the kindergarteners box the books and delivered them to a collection site.

Begin With A Book is co-sponsored by the St. Vincent de Paul Society and Fox 45-TV in Baltimore. Books will be distributed to children at Head Start programs, summer camps, after-school programs, and homeless shelters.

The Baltimore district of De La Salle Christian Brothers announced Christopher Barczak of Calvert Hall College High School, Towson, was named the 2008-2009 Distinguished Lasallian Educator. Mr. Barczak, a 1993 alumnus of Calvert Hall, is an 11-year religion department faculty member. In addition to his numerous activities at the school, he serves as an adjunct professor at Loyola College in Maryland, holds certification in youth ministry, is a catechist in the archdiocese, and serves in many roles at St. Ursula, Parkville, such as a sacristan and as a pre-Cana team presenter with his wife.

Our Lady of the Fields, Millersville, began a program called E3: Evangelize Everywhere Every day.

“In the spirit of today’s Gospel,” wrote Father Eugene Nickol in the parish bulletin, “it means to be ‘that son who does his father’s will’ … it means being one of countless tongues who proclaim Jesus Christ is Lord. Every day, everywhere, we as Christians are asked to show our love and gratitude to God by proclaiming the joyful Gospel of Jesus by the lives we live.”

Parishioners are encouraged to “be inspired and act.” An E3 Day is planned for Nov. 1.

Nancy E. McColgan and Leonard J. Yermal Jr. have been appointed members of Mercy High School, Baltimore, board of trustees for a three-year term 2008-2011.

The pair will join 20 additional members.

Ms. McColgan is an alumnae of both Mercy High School and College of Notre Dame of Maryland, both in Baltimore, and has completed a two-year executive leadership program at Loyola College in Maryland, Baltimore.

Mr. Yermal is the chief financial officer of Century Staffing in Bel Air.

College of Notre Dame of Maryland, Baltimore, has named David F. Salter assistant vice president for marketing and communications effective Sept. 29. Mr. Salter is a parishioner at St. Rose of Lima in York, Pa. He is responsible for the college’s overall marketing efforts including publications, advertising and Web design.