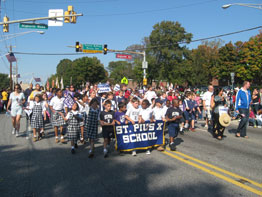 For the second time, St. Pius X School, Baltimore, received the School of the Year Award from the Maryland Center for Character Education for the school’s Character Education program. This program promotes values and ideals to help students achieve their fullest potential and future success and to become better Christians and citizens in today’s challenging world.

Also, 100 students and parents of St. Pius X walked in a parade Oct. 4 to honor Baltimorean and Olympian Michael Phelps. Chanting “USA” and the gold medalist’s name, the school community wanted to thank him for his accomplishments and show their pride in their hometown hero.

Catholic Charities marked its 10,000th consecutive day of serving noon meals at Our Daily Bread Oct. 16 with a meal of fish sticks and French fries. The facility has never closed in its 27-year history and in 2007, served more than 250,000 meals.

“Our Daily Bread has been a dependable beacon of hope for 10,000 consecutive days, serving millions of meals to Baltimore’s hungry,” said Harold A. Smith, Catholic Charities executive director, as he praised the thousands of volunteers and donors who have helped this comprehensive resource center. Our Daily Bread serves breakfast on weekdays and distributes monthly groceries to seniors.

Also, the hospital and the St. Agnes Foundation honored two physicians at the 46th annual St. Elizabeth Ann Seton Medical Staff Recognition Dinner. Dr. Michael Burke was awarded The Seton Founders’ Award, and Dr. Paul McClelland was the first recipient of The Bayley Award. Both doctors were honored for exhibiting the hospital’s tradition of dedication, compassion, and commitment to the service of the poor.

Mercy Medical Center, Baltimore, was recognized by the March of Dimes as a “pregnancy friendly workplace” as the hospital met the criteria for such a designation.

Mercy maintains a commitment to provide the necessary resources and accommodations to their pregnant employees and to those planning to become parents.

Educational materials are distributed, and five preferred parking spaces are designated in the garage for employees in their third trimester or for those experiencing complications. The hospital also has a lactation room in the mother-baby unit for new mothers wishing to pump breast milk.

Dr. Robert Atlas, chair of the department of obstetrics and gynecology, accepted an award on behalf of the hospital Oct. 24.

A hip-hop video titled “Stop the Violence,” aimed at encouraging Baltimore teens to reject violence, premiered at Cristo Rey Jesuit High School, Baltimore. Starring its students, the video is part of an anti-violence project of the University of Maryland School of Medicine. The music video was produced by an Academy Award-winning producer, and rapper DK (Wayne Watts) made an appearance at the premiere. Mr. Watts is a graduate of Calvert Hall College High School, Towson.

The video can be found at www.bettermyworld.org, which offers teens downloadable hip-hop YouTube videos, cell phone ringtones and electronic wallpapers.

In observance of the 100th anniversary of the Knights of Columbus Westminster Council 1393, the council is publishing a souvenir program booklet to be distributed throughout the community, to more than 150 councils around Maryland and at their anniversary banquet next April at St. John, Westminster.

This council has been an active fraternal service organization for the past 100 years in the Carroll County community, serving families, youth and the church. Fundraisers have included golf tournaments and car raffles to support youth scholarships, and donation collections have benefitted organizations such as ARC of Carroll County, Change Inc. and Target Inc. The council has honored teachers at an annual event and members of the military at the annual Patriots dinner.

Anniversary program book ads are available by contacting Bill Norton at 410-848-5494 or wjnorton@qis.net.