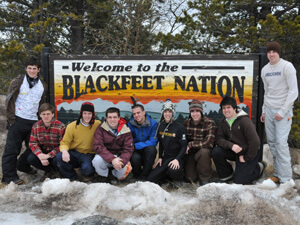 During an immersion week in February, nine Calvert Hall College High School students and faculty travelled from Baltimore to the heart of the Blackfeet Reservation in Montana to live at the De La Salle Blackfeet School for a week, entirely immersing themselves in the culture of the Blackfeet Indians.

Experiencing a simpler way of life, the boys slept on a gymnasium floor, cooked their meals, and tutored students in grades 5-8 in a Christian brothers school.

This once-in-a-lifetime trip “allowed students to connect with an otherwise out of reach culture,” said Marc Parisi, campus minister, “and helped them to understand the value of living in solidarity with others.”

On the school’s blog surrounding the trip, Phil Rasinski wrote: “I have seen a whole new world and I haven’t even left the country … The De La Salle Blackfeet school and its community has truly been … a source of inspiration for me.”

Sophomore Gina Peluso from Mercy High School, Baltimore, has designed a bumper sticker featuring the facade of America’s first cathedral – the Basilica of the National Shrine of the Assumption of the Blessed Virgin Mary in Baltimore.

The effort came together through Mercy’s chapter of the National Art Honor Society (NAHS), which focuses on service through art. Moderator Melanie Coburn, a Mercy graduate, is a teacher intent on giving her students real-world experience.

“The Basilica is giving to us by allowing our students to learn through them,” she said. “We are giving back by providing a product.”

The blue and white sticker sells for $2 and will be on sale at the basilica’s gift shop; 50 percent of the profits will be donated to Mercy’s NAHS.

John Schoppert, a 2006 graduate of Archbishop Curley High School in Baltimore,
has won the College Big Brother of the Year award for mentoring 8-year-old Riley through Big Brothers Big Sisters. He was recognized for making a positive difference in the life of a child.

Riley and John, a junior at Lycoming College in Pennsylvania, were matched two years ago and share a love of sports; the youngster is sometimes a spectator at John’s roller hockey games.

John said his experience as a mentor has given him a chance to connect with someone he might not have otherwise met – he encourages others to take advantage of this worthwhile opportunity.

“I get the chance to have a little brother and he gets someone to look up to,” he said.

Students learned about the history of the church and celebrated the life of the saint. Several paintings depicting his life were blessed by Father Matthew Buening and Father Michael S. Triplett, and now adorn school halls.

Tyler Gillespie, an eighth-grader at St. Clare School in Essex, who attended the presidential inauguration of Barack Obama in Washington, DC, expects to be invited to an international conference in Europe this spring as a guest of the Junior National Young Leaders Council with which he has been involved since the sixth grade.

In other news from St. Clare, many young female students have been growing out their hair to then have it cut off to donate it to Locks of Love, the organization which creates hair pieces for chemotherapy patients.

A dozen languages were heard during a multi-lingual rosary at St. Luke in Edgemere Feb. 21, when the parish’s Sodality sponsored a pre-Lenten retreat.

Worshipers from throughout eastern Baltimore County joined Monsignor Joseph S. Lizor Jr. , pastor, and Father Francis Nhi Nyugen, pastor of Our Lady of La Vang in Dundalk, who led the rosary in Latin.

Baltimore’s Cristo Rey Jesuit High School sophomores Xavier Cole and Arthur Williams appeared on stage with comedian Bill Cosby during Mayor Sheila Dixon’s Black History Month celebration, Feb. 7. Mr. Cosby had visited a Cristo Rey school in Los Angeles, and was so impressed with the program, he asked for two young men from Cristo Rey in Baltimore to appear with him during his visit to the War Memorial Plaza downtown. Xavier and Arthur are leaders in hours of service through the school’s community service program.