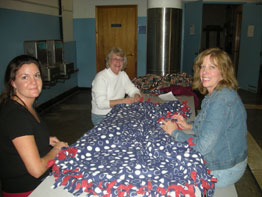 Two evenings of fun, fellowship and blanket-making in the parish center of St. Mark, Catonsville, resulted in sending more than 130 fleece blankets to Soldier’s Angels (www.soldiersangels.org), an organization distributing blankets before Christmas to 180,000 deployed soldiers.

“We want them to know they are remembered,” said Mary Scavilla, who coordinated the Blankets of Belief effort at St. Mark’s, “that we are thinking of them during the winter holiday season, and that we are grateful for their service.”

Each blanket included a card, and blanket makers prayed over their handiwork in progress.

Gerard E. Holthaus was presented with the 2008 Business Leader of the Year award by Loyola College in Maryland’s Joseph A. Sellinger, S.J., School of Business and Management, at the annual award dinner Nov. 19. Mr. Holthaus is a graduate of Loyola and Archbishop Curley High School, Baltimore. He is the chairman and chief executive officer of Algeco Scotsman, the leading global provider of modular space solutions.

The Sellinger School has honored a Business Leader of the Year since 1983.

A Nov. 8 football game between Loyola Blakefield, Towson, and Georgetown Preparatory school in Bethesda featured an extra winning component as players from Georgetown presented Father Thomas A. Pesci with a $5,000 check for the Dennis Woolford Memorial Fund. Dennis was a junior who died in a car accident on his way to school Sept. 26. The funds were raised through the sale of a T-shirt Georgetown had designed to honor Dennis.

Blakefield students Michael Packo and Michael Smith also designed a Dennis T-shirt which they sell during lunch periods and at sports games, also to benefit the memorial fund.

Teachers and staff at St. Margaret School, Bel Air, dressed in costume to help raise money for St. Rose of Lima School in Haiti. Grades K-5 attended an assembly carting coins from their piggy banks, plus parent donations, to cast votes for their favorite costumed characters.

The winner was Janet McAdory, a fifth-grade math teacher emulating an oompaloompa, a “Charlie and the Chocolate Factory” movie character. The real winner, however, is the small Catholic school in Haiti who received $1,227 from this outreach event.

Students at Mother Seton School, Emmitsburg, collected 2,173 cans of food for the Make a Difference Day organized by the Thurmont Lions Club. Also donated was $160 in gift cards. Volunteers transported the goods to the Emmitsburg Food Bank who reported they were delighted with the effort because of the growing number of families needing assistance.

St. Mary’s School, Annapolis, reported it had 44 out of 99 seventh-graders qualify for the 2009 Johns Hopkins University’s Center for Talented Youth talent search. This requires students to have scored in the 95th percentile or higher in one of the subtests for verbal or mathematical reasoning on a standardized achievement test.

St. Agnes Hospital, Baltimore, has named Dr. James P. Richardson as the new chief of geriatric medicine; he will devote the majority of his time to outpatient and inpatient consultations for geriatric patients.

Students of Trinity School, Ellicott City, celebrated Veterans Day with a special ceremony including the Missing Man Table tradition celebrated throughout U.S. dining rooms since the Vietnam War ended. Those men and women who served in the armed forces and are missing in action or held as prisoners are honored.

The table is set symbolically with a white tablecloth, a red ribbon tied to a vase, a slice of lemon on the plate as a reminder of their bitter fate, and a pinch of salt on the plate for the families’ tears. An inverted glass means the soldiers are not able to toast the meal, and an empty chair is self-explanatory.

Trinity’s remembrance included patriotic music, song and dance, and the presentation of the American flag to relatives of students who served in the armed forces. Baskets with the names of veterans were carried to the chapel and placed on the altar.

The flag used for the ceremony – and the one flown daily on school property – once covered the casket of a student’s grandfather, donated to the school after he died. He was a Veterans Day visitor last year.

Mercy Medical Center, Baltimore, named the two recipients of this year’s Spirit Awards, those chosen who best demonstrate and personify the values of foundress Catherine McAuley and the Sisters of Mercy.

Michael Cavaretta, a registered nurse in post-anaesthetic care unit, and Dr. Albert Polito of The Lung Center, were recognized with a plaque and $1,000 each. Dr. Polito is a parishioner of St. Leo, Little Italy.