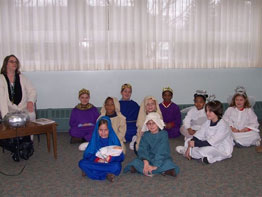 Third-, fourth-, and fifth-graders twice performed “Christmas Special Delivery,” once to a group on the first floor, and again to infirmed sisters upstairs. The retired nuns seemed to enjoy the holiday cheer and song and said they were delighted to spend time with the children.

“I was happy we made the sisters feel good,” said Lily Batchelor, a third-grader. Classmate Jacob Stahl thought “it was good to do something for others.”

The school paid for the field trip with money earned through their recycling program.

After the 18-member middle school choir of St. Joseph, Cockeysville, performed twice for retired Sisters of Mercy and Mission Helpers Dec. 19 at The Villa, Towson, each sister received a gift bag as the students walked around the room to interact with them. Sister Anne O’Donnell, the school’s principal and a Religious Sister of Mercy, then presented to the retired nuns a Wii system and all the accessories on behalf of the school for use in the common TV area.

The choir is led by teachers Isabel Blevins and David Pomplon.

Some of Baltimore’s homeless and needy discovered an extra treat in their bagged lunch – an invitation to attend a Dec. 22 Christmas dinner and party at St. Leo’s, Little Italy.

The St. Anthony Society expected to feed about 400 people as they assisted community members in celebrating Christmas with an Italian flare. Invitations were also extended through local soup kitchens such as Beans and Bread.

During December students at Resurrection-St. Paul School, Ellicott City, held a toy drive to benefit St. Katharine, a Queen of Peace Cluster School in Baltimore. A total of 525 gifts were donated.

“I am so blessed because I got to see the look on the faces of these amazing children as they opened the gifts,” wrote Angela Calamari, principal of St. Katharine’s, in a thank you letter, “which you so lovingly and generously provided … I get to be the vehicle that connects two communities to bring such joy.”

Following tradition, the children placed their shoes outside on the feast of St. Nicholas to await his arrival; he faithfully delivered tasty treats in each shoe as they worked inside.

Towson Catholic High School “helpers” had collected the goodies and assembled them in a workshop session; they have been learning about vocations, marriage, and family in a senior theology class.

“This is such a sweet thing to do,” said teacher Erin Sudano, “it makes the children so excited!”

An interesting version of “Oh Christmas Tree” included spunk and soul Dec. 18 as almost 60 red-sweatered Cardinal Shehan School, Baltimore, students sang, danced, and clapped through a medley of Christmas carols for The Catholic Center employee luncheon. Several soloists with hearty voices confidently stepped up to the microphone to share their uninhibited talent. Choir members were dressed in school uniform.

“You can’t take the ‘J’ out of Jesus!” was one of the peppier songs, led by a piano player and a choir director.

The students received a standing ovation before Catholic Center employees shared a meal blessed by Archbishop Edwin F. O’Brien after a noon Mass at the Basilica of the National Shrine of the Assumption of the Blessed Virgin Mary, Baltimore.

Associated Italian American Charities (AIAC) will distribute more than $300,000 to about 65 various charities, some Catholic, plus 30 scholarships worth $2,500 each to dozens of area colleges and universities, reported Thomas J. Iacoboni, board member and past president. The distribution will take place Jan. 13 at Martin’s Caterers in Hunt Valley.

AIAC is a group of mostly Catholic Italian-American businessmen who raise money for nonprofits. Each member chooses a charity close to their heart.

“I have been a member since 1982,” said Mr. Iacoboni, a parishioner of St. Leo, Little Italy, “and have witnessed their many fine deeds through many years.”

Items for consideration for PEOPLE PLACES THINGS should be emailed to Suzanne Singleton at ssingleton@catholicreview.org.