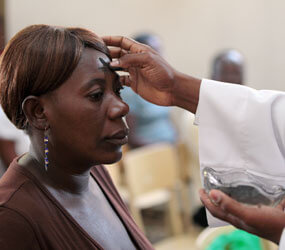 VATICAN CITY – People have been pleading for help in digging loved ones out from under the rubble while others have fled to the hills for fear of tsunamis, said the Vatican’s nuncio to Haiti.

In an e-mail to Catholic News Service Jan. 14 from the capital, Port-au-Prince, Archbishop Bernardito Auza said he and others were trying to round up all the priests and religious men and women who had been left with nothing. He visited religious houses and centers to check on conditions and to express Pope Benedict XVI’s concerns.

The archbishop said the aftershocks were continuing, but were less violent.

“People are sleeping on the street and wandering around with nowhere to go, but many have fled for the mountains out of fear of tsunamis,” he said.

“We’re having great logistical difficulties for very evident reasons. We don’t have any water reserves, and gas stations are closed,” he said.

He confirmed that Archbishop Joseph Serge Miot of Port-au-Prince was killed in the magnitude 7 quake that struck Jan. 12.

As of early Jan. 14, one of the archdiocese’s vicars general, Monsignor Charles Benoit, and the chancellor were still under the wreckage of the collapsed archbishop’s residence. The nuncio said the chancellor had definitely been killed, but the fate of Monsignor Benoit remained uncertain because the bodies were buried in debris.

“The four floors of the archbishop’s house have been reduced to a pile of cement,” he said.

Archbishop Auza said he visited the city’s major seminary, which was reduced to a heap of dust and debris.

“Thanks be to God, all except one of the instructors were able to get out from under the rubble but three or four seminarians are still missing, and nine have been confirmed dead,” he said in the e-mail.

He added that church officials were uncertain as to the total number of religious who were killed in the quake.

The exodus of people from the city was helping “decongest the capital, which has nothing” left, he added.

A group of bishops met Jan. 13 at the nunciature to coordinate efforts and come to some decisions on a plan for action. The bishops were to follow up that meeting with another gathering at the nunciature Jan. 15 with leaders from CRS and Caritas, he said.