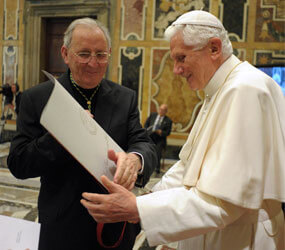 VATICAN CITY – While empirical science has done much to further progress, subjecting God and his truth to scientific scrutiny represents an incorrect and despotic use of human reason, Pope Benedict XVI said.

How reason, truth and faith interconnect has always sparked debate throughout history, the pope said June 30 during an award ceremony in the fresco-covered Clementine Hall in the Apostolic Palace.

The pope used the occasion to talk about the significance and the challenges surrounding theology.

He noted the important contributions theology has made, but warned that theology must not only be concerned with the past as that would “leave the faith today in darkness.”

Nor must theologians only look at psychological or sociological studies leaving faith on the wayside as that would strip theology of meaning and a solid foundation, he added.

Though studying the past and understanding human and social sciences are important in theology, the pope said the real question at stake is: “Is what we believe in true or not? In theology the question of truth is at play: truth is its ultimate and essential foundation.”

Christ is the truth, and people can and must know him through reason, he said.

“From here one understands that Christian faith, by its very nature, must call forth theology, it had to ask itself about the reasonableness of faith.”

So while reason is fundamental to faith, there is an incorrect use of reason – a “despotism of reason which becomes the supreme and final judge of everything,” he said.

The pope said this use of reason, which is “incompatible with the nature of faith,” can be seen in Psalm 95, which recalls Meribah as the place where the early Israelites tested God and “tried me though they had seen my works.”

Putting God to some sort of a test is even more pronounced in today’s world, where natural science and its empirical method have achieved so much, the pope said.

But there is a limit to how reason is used: “God is not an object of human experimentation. He is a subject and he manifests himself only in a person-to-person relationship,” he said.

The correct use of reason in matters of faith then is when it is used on a personal level and is driven by love.

Love will satisfy a person’s thirst to really know the other, and that is why those who seek the truth are on the path to seeking God, he said.

“This is why authentic theology is so important. Solid faith leads reason to open itself up to the divine, so that reason, guided by love for the truth, may know God even more from up close,” he said.

Therefore, theology must be made up of two elements: “humility, which lets us be ‘touched’ by God, and discipline, which is tied to the order of reason, (which) keeps love from blindness and helps develop its power to see,” he said.

During the ceremony, the pope greeted each of the prize recipients, handing them each a large award certificate and a small envelope.

The Ratzinger Prize will be awarded each year in sacred Scripture, patristics and fundamental theology.

This was the first time the prizes were awarded since the establishment last year of the Joseph Ratzinger (Benedict XVI) Vatican Foundation, which promotes theological studies on the pope’s writings and to reward promising scholars.