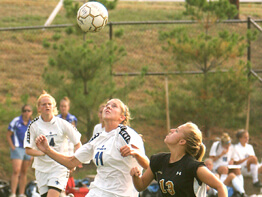 Gary Lynch is a veteran of the sport of soccer. He has coached for more than 30 years at both the high school and college level and has won close to 90 percent of his games over the years.

He has spent the last 11 seasons, though, as the head girls’ soccer coach at The John Carroll School, Bel Air. He has brought tremendous success and notoriety to the team and the school.

No superstars except for maybe senior lacrosse phenomenon Allyson Carey, who is headed to Vanderbilt University next fall. Carey, who is often described as the top high school lacrosse player in the country, also excels on the soccer field.

In a new position at central midfield this season, Carey is so athletic, so strong and so focused that she is leading the team both on and off the field. Carey is a team captain along with senior Grace Gaeng, who is described by her coach as a spitfire full of energy and a player with a very big heart.

In addition to Gaeng, there is a lot of heart on this year’s Patriots team. Take senior Krista Fassio – Fassio is playing through the season with a torn ACL, her second in as many years. She has worked very hard to strengthen her knee and just played in her first full game on Oct. 13 against local Harford County rival C. Milton Wright High School.

“Krista will be ready for the tournament,” said Lynch. “I can tell you that she motivates this team. How could she not? She motivates me.”

While Carey and Gaeng are pumping in the goals (17 goals combined), Lynch highlights Brittany Dashiell on the defensive end. “Brittany is our top defensive back. She draws all of the tough assignments, and she’s a remarkable player.”

Coach Lynch is a reflective man who will often comment on the number of “life lessons” sports provide for student athletes. In fact, he tours the country speaking and teaching about soccer, coaching, parents and the art of making the sport more for kids than just rolling out the ball.

As he looks back over his teams and seasons past, he is very mindful that his John Carroll athletes have always been overachievers. “Our kids push themselves and each other so hard, and I see the seniors pass that work ethic on.”

Lynch contends that the kids are at the foundation of this mindset, but more than likely it’s the coach himself.