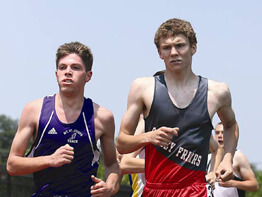 The Interscholastic Athletic Association of Maryland’s A Conference lacrosse finals took place May 13 at Loyola College in Maryland, Baltimore. Under sunny skies and with a packed house, the late afternoon match-up pitted The John Carroll School in Bel Air against Severn School.

Both teams upset top-ranked contenders to get into the finals, and it was down to the wire as the John Carroll Patriots (14-3) took it into overtime to defeat Severn (14-8) 10-9.

It was a team effort, but in the stat book it was all Casey Ancarrow and Ally Carey. The Patriots’ offensive geniuses found the angles and the back of the net time and time again. Ancarrow scored five goals on the day and Carey had two, the biggest of which came with 32 seconds left in overtime. Also scoring for the Pats was Grace Gaeng with one goal and Cori Gray with two goals.

Defensively, the Patriots were strong, led by Liz Pons, Tori Pyzik and Kaitlyn Gambrell. All three defenders thwarted Severn’s attack along with a stellar performance in the goal by junior Lauren McGehee who notched nine saves on the day.

The Patriots defeated St. Paul, Brooklandville, in the quarterfinals 10-7 and St. Mary’s, Annapolis, in the semifinals game 9-8 to make it into the IAAM A Conference championships. Head coach Krystin Porcella has worked long and hard with her program as the Patriots’ improvement had continued throughout the season. John Carroll placed third in regular season and put up 161 goals on the year. This is John Carroll’s first IAAM A Conference championship title.

According to head coach Gene Hoffman, defending champions Archbishop Curley, along with Loyola Blakefield and Gilman were favorites to win the meet. “Curley peaked at the right time and probably could still improve,” said Hoffman.

Seasonal highlights include a third-place finish at the Loyola Invitational, first place in the 4×100 at Colonial Relays, Williamsburg, Va., and first place out of a field of 19 at the Lock Haven University’s Bald Eagle Invitational.