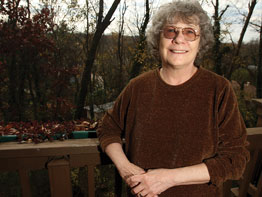 Laurie Long gives thanks for the one surgeon who would operate on her – all 440 pounds of her. Margaret Wiley saw divine intervention in the doctors and nurses who persuaded her to quit smoking after 50-plus years of puffing butts. Another patient recalled the “angels” in the hospital’s cancer center.

In this, the season of Thanksgiving, the patients – and others treated at St. Agnes Hospital – expressed their gratitude as part of the Grateful Patients Program. And many of their stories appear on the Web site of the St. Agnes Foundation, which raises funds for the hospital.

Mrs. Wiley, 67, recalled being treated for respiratory infection in September.

“It is a gift,” she said. “I believe this whole experience was a kind of divine intervention.” Mrs. Wiley, of Catonsville, expected harsh staff who would lecture her about the dangers of smoking.

“I felt like a scruffy old addict,” she said. “I thought they were going to censure me, stick their fingers in my face and say, ‘Look what you done to yourself.’ But they didn’t do that. They looked for the best part in me and encouraged that, nurtured that. They talked to the place inside me that knew it was better to stop smoking.”

Mrs. Long, in a letter, said she had lost 215 pounds – and thanked Dr. Andrew Averbach.