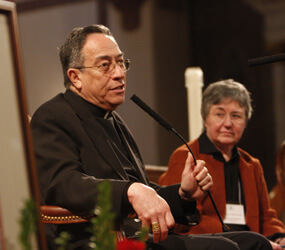 NEW YORK – A speaker at a symposium celebrating the silver anniversary of the National Pastoral Life Center said the center has sought to strengthen the Catholic community and has a role in reconciling divisions and conflicts within the church.

“But a reconciled and reconciling community is also a community of hope: a community that can see in a critical fashion beyond the present and not lose sight of what its Lord has promised it – a time when ‘God will be all in all,’“ said Father Schreiter, quoting from St. Paul’s First Letter to the Corinthians.

“One sees the church at its best … in its support of immigrant rights, for example, where the suffering of those in migration is not forgotten, where migrants are offered a safe haven, where others can stand with them and stand up for them, and where efforts are made to secure them a better future,” he said.

“If one looks back over the many things that (the center) has tried to undertake for the sake of the church in the past 25 years, we can recognize how it has sought to strengthen the memory and sustain the hope of a community struggling with divisions and conflicts, yet seeking to be something more,” the priest said.

The center’s mission is to promote excellence in pastoral leadership by serving the needs of pastoral leaders in parishes and dioceses. It was founded in 1983 by Monsignor Philip Murnion, a New York archdiocesan priest, who led the center until his death in 2003.

The current executive director is Paulist Father John E. Hurley, who will deliver the April 20 opening lecture in the John Carroll series at the Basilica of the National Shrine April of the Assumption of the Blessed Virgin Mary.

Father Schreiter also lauded the center for assuming leadership in the Catholic Common Ground Initiative, formed in 1996 by the late Cardinal Joseph L. Bernardin to promote dialogue in the church.

“The (initiative) touches upon some of the most neuralgic points for life within the church today; the divisions that were named in the … founding document, ‘Called to be Catholic,’ are still very much in evidence and have, in some instances, become even greater flashpoints,” he said.

“The efforts that have been undertaken, and those efforts that are still under way and seek ever deeper commitment on the parts of those who participate in their programs, reflect much of the dynamics of reconciliation,” he said.

The founding document to which Father Schreiter referred discussed tensions arising in the church from issues such as women’s changing roles, the liturgy “as most Catholics experience it,” human sexuality, the image and morale of priests, laypeople in leadership positions formerly held by priests and nuns, how the church is present in political life, the church’s capacity for embracing Catholics from different ethnic and racial groups, and the church’s decision-making and governance structures.

In his remarks at the symposium, Cardinal Oscar Rodriguez Maradiaga of Tegucigalpa, Honduras, cautioned against risking irrelevancy in the quest for relevance.

“Many churches today feel the need to be contemporary. The assumption is that in order to reach people the church should put aside its old-fashioned styles and get with the times. The hoary liturgy should be done away with and those archaic hymns should be replaced with music people are listening to today,” Cardinal Rodriguez said.

“There are different generations, but they are all equally in need of Christ,” he continued. “The church is the place where generational differences are to be transcended, not reinforced; where ephemeral fashions and cultural distinctions are subsumed into an eternal perspective, into a kingdom which ‘endures from generation to generation,’ ” he added, quoting from the Old Testament Book of Daniel.

“Only a church which resists being merely of one generation can be relevant to them all,” he said.

Tom Beaudoin, associate professor of theology at the Graduate School of Religion and Religious Education at Jesuit-run Fordham University in New York, spoke on the phenomenon of “secular Catholics.”

“Many here would say that secular Catholics are putting something in place of church, like sports, work, leisure. They are the ones who may have left the church intentionally, scandalized or disappointed, but more often have just drifted away,” Mr. Beaudoin said.

“There are secular Catholics in my family; there are probably some in yours. They constitute the oceanic and silent penumbra of the Catholic Church,” he said.

Mr. Beaudoin added, “Secular Catholics may include the many who call themselves ‘recovering Catholics,’ and who do so because the apocalypses of their lives – physical, psychological, intellectual, spiritual – were not able to be located on the map of the faith they had been taught.

“And contrary to many Catholic apologists – including my earlier self – this does not necessarily mean that they had a deficient religious education. This is too convenient a story for ‘us’ to tell about ‘them,’ ” he said. “Many ‘recovering Catholics’ know as much of what Catholicism at its best is about as those who still choose the Catholic Church as central to their lives.”

Secular Catholics, according to Beaudoin “are often more or less trying to get through their lives, like all of us. They often share something important with Paul and for that matter, with Christ: service to the truth.”