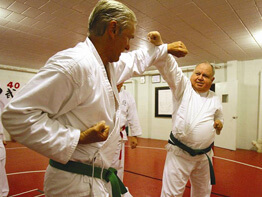 Though Father Joseph G. Bochenek finds everlasting solace in his Catholic faith, the 62-year-old pastor of St. Brigid, Canton, has discovered the four hours of karate he studies each week keeps him nimble and in top form.

The sprightly pastor kicks, jabs and turns with the gracefulness of a ballerina in a room of participants counting in Japanese and moving in what resembles a choreographed dance.

“I’ve been taking this class for four years, ever since it’s been held here,” Father Bochenek said. “It’s offered me discipline, balance, physical fitness and tranquility. For the group, it’s offered us companionship in a wholesome and friendly atmosphere.”

While St. Brigid parishioner Mark Smith likes that he and his 14-year-old daughter Stephanie have learned valuable self-defense techniques while taking the class together, he believes they have also been taught to respect the knowledge afforded them and only use it as a last resort in a confrontation.

“We are told over and over again to avoid a physical confrontation by calling for help or removing yourself from the situation when it’s possible,” the 40-year-old Canton resident said. “But, it’s nice to know you have a tool in defending yourself if you are forced to.”
Father Bochenek finds the philosophy of the martial art doctrine well-matched for a Catholic parish that subscribes to community-based discipline that instills hard work, collaboration and confidence.

He has also known Mr. Simons, a Church of the Resurrection, Ellicott City, parishioner for four decades, and he even performed the 1971 marriage ceremony for him and his wife, Patti – so when he asked to run his small school at St. Brigid’s parish, the pastor enthusiastically agreed.

Having studied the discipline for 20 years and having competed in two world championships in Okinawa, Mr. Simons charges a $5 participation fee for each two-hour class – just enough to pay for the program’s bottled water and equipment and to make a donation to the church in exchange for the use of the space.

“It’s not about the money, it’s about the love of the sport,” said Mr. Simons, 56, an Anheuser-Busch distributor by day. “We’re not just a school, we’re a community.”
Over the years the Shorin Ryu Karate school members have volunteered their time to paint their current space, decorate it with Japanese-influenced artwork, install mats and build equipment for use in the classes.

“It builds an appreciation for the discipline when everyone is involved,” Mr. Simons said.
Though several parishioners from St. Brigid’s take the bi-weekly classes, the school has also attracted other Catholics from throughout the Archdiocese of Baltimore as well as non-Catholics.

“This is also a great cardio workout,” Mr. Rees said as he wiped the sweat from his brow. “It’s also a lot of fun.”