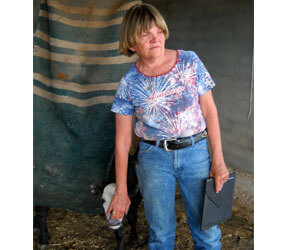 DOUGLAS, Ariz. – In a small town like Douglas, the mayor and the Catholic pastor tend to be in the middle of most of the important things that happen.

So when it comes to the current hot debate about illegal immigration, Father Gilbert Malu, pastor of St. Luke’s Catholic Church and two other nearby parishes, and Mayor Michael Gomez, a Douglas-area native who retired from his dental practice before getting into politics, are in prime positions to see how the nuances play out in this city of 20,000 people on the Mexican border.

Both men find themselves trying to address the sometimes conflicting interests of the people they serve while dealing with everyday events. The two talked to Catholic News Service in separate interviews in their offices in July.

Gomez worries about Arizona’s new immigration law, S.B.1070, scaring off the trade with Mexico that keeps his city alive economically. He would like to see new roads in Mexico and a modern port-of-entry building that can draw to Douglas some of the truck traffic that now bogs down at the closest major port in Nogales.

But he also wants a stronger Border Patrol presence to help the people of his town feel more secure from the drug trafficking-related violence that has rocked some Mexican border cities.

Father Malu must tend to the pastoral needs of parishioners who include Border Patrol agents, ranchers whose property is traversed by smugglers, families with members who are in the country illegally and U.S. natives whose Latino features make them targets for questioning over immigration status.

Father Malu tells the story of parishioners who have been in St. Luke’s for more than 20 years, raising a family, leading a quiet life.

When the wife was diagnosed with cancer, her husband came to Father Malu, worried about how to get her medical care. The treatment was available about 50 miles away in Sierra Vista, the next largest town, but the couple had no health insurance to pay for it, the priest explained. A charitable program had offered to cover the expense, but she would have to get to Phoenix, another three hours north.

Reaching Phoenix wasn’t the big problem for the couple, said Father Malu. The difficulty lay in getting past the Border Patrol checkpoints they would encounter beyond Sierra Vista.

Any route toward the major cities of Tucson and Phoenix would mean passing through at least one checkpoint, where the couple might be asked for proof that they are in the country legally. Neither of them is.

“Many of our families are struggling with immigration issues,” Father Malu said. His parishioners also include the survivors of Rob Krentz, who was murdered on his ranch outside Douglas in March. Sheriff’s investigators suspect the killer was involved with drug smugglers, but as of mid-August the crime remained unsolved.

Krentz’s widow, Sue, has allied with Gomez in his efforts to get the City Council to pass a resolution calling upon the federal government to “secure the border.” But he readily admits that “I don’t think you’ll ever get (the border) completely secure,” and when pressed, he is unable to quantify what he means by “secure the border.”

Instead, he talks about the need for air support to combat the ultralight aircraft used by drug smugglers, and federal funding for a 10-point security plan proposed by Sens. Jon Kyl and John McCain of Arizona, both Republicans. It includes completing 700 miles of border fence, deploying 3,000 National Guard troops to the Mexican border and adding unmanned aerial surveillance to allow for 24-hour coverage of the region.

Gomez warns darkly of the hazards – known and unknown – that he believes are posed by undocumented immigrants crossing through Cochise County. Backpacks loaded with drugs left under trees for pick up, for instance, “creates a health problem,” Gomez said. “How do we know what they’re bringing over here?”

At St. Luke’s, Father Malu tries to soothe such fears of the unknown and the imagined.

“Look at it in the light of our faith,” he tells his parishioners. “Put yourself in the shoes of a mother or dad, brother or sister struggling to make a living. What does your faith tell you to do?”

An immigrant from Congo who has lived in Douglas for eight years, Father Malu recognizes that his expectations are different than those of many of his parishioners.

“I came from where the dominant culture is that what you have you share with others,” he said. “If you have two pairs of shoes, you give one to somebody with no shoes.”

“I look at it in the light of not just my culture but of the Gospel,” he continued. “I’m preaching the message of Jesus Christ.”

He knows some people have left the parish because they disagree with his approach, which is not unlike that of his predecessor as pastor and has been echoed by Tucson Bishop Gerald F. Kicanas, who calls for comprehensive immigration reform. It doesn’t faze Father Malu.

“I could make it my life’s work, trying to please people,” he said. “But that would be running away from what I believe is the message of my faith.”