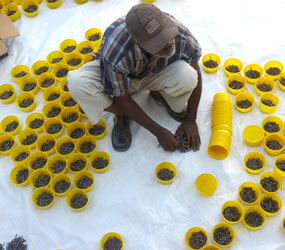 LIMA, Peru – When a magnitude 8 earthquake crumbled houses and toppled churches in Pisco in August 2007, millions of dollars’ worth of aid poured into Peru from around the world.

Two-and-a-half years later, however, families still live in tents, children attend school in makeshift classrooms and reconstruction of the government-run hospital has not even begun. The government was slow to distribute promised vouchers for housing reconstruction, and many people, tired of waiting, began rebuilding on their own.

The aftermath of the Pisco earthquake and other disasters offers cautionary lessons for aid agencies and government officials who must help Haiti rebuild once the emergency teams go home and other crises capture the world’s attention.

“Everything that is happening now in Haiti is what we’ve been through in Pisco,” said Willy Benavente, who coordinates disaster and emergency services for the Peruvian bishops’ social action commission. “It’s a serious problem when the government does not have the capability to provide assistance.”

Reconstruction is likely to be even more complicated in Haiti, which had the region’s highest poverty rate and a weak government even before the Jan. 12 earthquake killed at least 200,000 people and destroyed much of Port-au-Prince, the capital city.

Government buildings, including the health, finance and education ministries, collapsed, killing as many as one-third of the government’s employees, said Thorup, CRS regional director for Latin America and the Caribbean.

CRS was able to act quickly because it had a large staff in Haiti – 320 employees – and because of lessons learned from other disasters.

Central America and the Caribbean have been battered by storms over the past dozen years. Hurricane Mitch, in October 1998, was one of the deadliest, killing at least 9,000 people and leaving another 9,000 missing, besides causing millions of dollars in damages.

Hurricanes Ivan and Jeanne in 2004 and Dennis and Wilma in 2005 also left deaths and destruction behind.

Those disasters demonstrated the importance of having warehouse space in vulnerable countries, Thorup said. When forecasters predict a hurricane, plastic sheeting, water purification tablets, emergency rations and hygiene kits are shipped to the areas most likely to be affected.

Several of those hurricanes, especially Jeanne, caused devastation in Haiti. Although an earthquake is less predictable than a hurricane, CRS already had supplies in Haiti, the Dominican Republic and Miami. Its warehouses in Haiti were outside Port-au-Prince, so the staff could respond quickly, even though many had lost their own homes and some had lost family members.

After the Asian tsunami in 2005, CRS learned the importance of acting quickly, getting experts into the field rapidly and coordinating with local church agencies, Thorup said. While strategy is important, rapid response is crucial, and logistics, communications and security are key, he said.

Security at food and supply distribution points is important because “you want to maintain order – you don’t want people to get hurt,” Thorup said. “You need enough security that the security force doesn’t have to push back.”

In the chaotic early hours or days of a disaster, communications often break down. Thorup discovered the power of social networking when he arrived in Port-au-Prince five days after the earthquake. Phones were not working, and even satellite links were unreliable.

So the first night, Thorup began chatting with colleagues over the Internet. Soon representatives from other aid agencies joined in. The Internet coordination was so efficient that “I didn’t want to turn off my computer, because I didn’t want to stop the conversation,” he said. “By then, however, it had taken on a life of its own. If it hadn’t been for Skype (an Internet phone and chat service), I don’t know what we would have done.”

CRS is focusing on water and sanitation, shelter, advanced medical care and food security, Thorup said. While assistance is still in the emergency stage, it will slowly phase into long-term reconstruction.

In Peru, reconstruction hit roadblocks. Infighting among government agencies left people to rebuild on their own. Worried that people would reuse the dangerously weak adobe bricks from their collapsed homes, the bishops’ social action commission launched a program to help people make cement bricks, supplying materials as homeowners provided the labor.

“We tend to overestimate the capacities of people who have lost their homes,” said Benavente, who found that many people did not have bricklaying skills and most were so busy scrounging for odd jobs that they had no time to make bricks.

Though large companies, which had insurance and access to loans, recovered relatively quickly, smaller businesses were crippled.

“It’s the small, family businesses that operate out of people’s homes that suffer most,” Benavente said. People who operated restaurants, tailor or shoemaking shops or small stores out of their homes lost their buildings, equipment and materials.

In families where both parents worked before the earthquake, afterward one had to stay near the ruins of the home to care for the children and protect what few belongings remained.

“So from an income of $25 a day, they’re down to $10 or $12, and they still need to rebuild the house,” Benavente said. “Whatever income they had went to buy food. If we don’t understand these processes, any timeline for construction will be unrealistic.”

Church workers found that it sometimes took eight months for a family to make enough bricks to rebuild a small, one-story house.

Lessons learned from the Pisco earthquake include the importance of involving local people, especially neighborhood organizations, in planning for the emergency response and reconstruction. There are fewer security problems when refugee camps are set up neighborhood by neighborhood than when people from different areas, who do not know each other, are crowded together in a single camp, Benavente said.

“We cannot be ingenuous altruists,” he said. “A disaster brings out both the best and the worst in people.”

Haiti will face many of the same problems as it shifts from emergency mode to reconstruction.

“It’s going to take a tremendous amount of work,” Thorup said. “I see a huge operation for 10 years. Haiti, being the poorest country in the hemisphere, with one of the most centralized governments and with weak institutions, was the absolute worst place to have a disaster.”