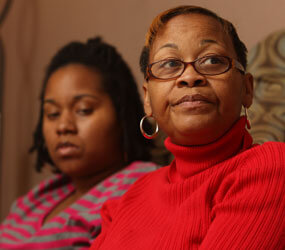 ANNAPOLIS – Her voice filled with emotion, the mother of a woman who died while undergoing an abortion implored a Maryland Senate committee March 2 to pass tighter regulations of abortion clinics.

“I’m not going to shut up until everyone has heard from the rooftop what has happened to my child,” said Stephanie White, addressing members of the Senate Finance Committee.

White’s 21-year-old daughter, Denise Crowe, died in 2006 after receiving too much anesthesia while undergoing an abortion in Severna Park.

“(It can) happen to anyone else’s mother, sister, cousin, any kind of relative that finds themselves going into these slaughterhouses thinking they are going to get an abortion in the morning,” she said, “and go home in the afternoon like nothing ever happened.”

White asked the committee to approve Senate Bill 505, a measure that would regulate abortion clinics as ambulatory surgical centers. They are currently regulated only as doctor’s offices.

Tieya Parker, Crowe’s older sister, testified that abortion clinics should not be treated any differently than other ambulatory surgery centers.

“If that bill was put in place and those people were trained to save my sister’s life,” Parker said, “she would be here today.”

Parker noted that Crowe left behind a son who is now 8 years old, along with family and friends who loved her. She has nephews and nieces she will never meet, Parker said.

Sen. Nancy Jacobs, one of the chief sponsors of the bill, described abortion as a serious surgery that demands regulation as a surgical procedure.

“A woman’s reproductive system is a very vulnerable part of the human body,” said Jacobs, a Republican who represents Harford and Cecil counties.

“Instruments used to remove a fetus can breach the walls of reproductive systems,” she said. “They can damage surrounding tissues and organs – including intestines, blood vessels, the urinary tract area and other vital structures. And yet, we’ve allowed this kind of surgery to take place in doctor’s offices.”

The bill would require abortion clinics to follow the same health and safety regulations that are in place for other ambulatory surgical centers.

Robyn S. Elliott of Planned Parenthood of Maryland, argued against the bill. She asserted that it would require abortion clinics to have larger hallways and operating rooms. It would add expenses and make abortion less accessible, she said.

Sen. C. Anthony Muse, a Prince George’s County Democrat, said a woman has a right to an abortion and a right to privacy, but also a “right to be safe.”

Sen. E. J. Pipkin, an Eastern Shore Republican, pointed out that for 18 years, pro-choice leaders have talked about working with the State Department of Health and Mental Hygiene to look at regulations. Nothing has happened.

Bill opponents promised that dialogue would take place with state health leaders and that a letter would be forwarded to the committee indicating that the dialogue was underway.

“You are having a dialogue and we’re going to get a letter,” Pipkin said. “That’s much different than legislation.”