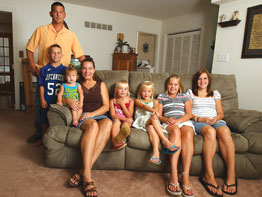 It was the summer of 2003, and Majchrzak had just watched the final hours of his wife Jennifer’s life tick away at a local hospital after a failed gall bladder surgery.

The faces of the couple’s children – Allyson, Lauryn, Zachary and twins Meagan and Justine – were a stark reminder of the challenge that lie ahead.

The couple had a dream of sending their young children to the hometown school he attended, St. Jane Frances de Chantal.

“Regardless of what it costs, I’m going to do what I need to do for them to go there,” he said. “I went there. I know first-hand what kind of people they have there. In my opinion, is it worth it? Yeah. It’s a shame there are certain kids who can’t go there. I couldn’t imagine them going to another school.”

Mr. Majchrzak, who works for the National Security Administration, was overwhelmed after his wife’s death, as Jennifer’s mother committed suicide and his mother died in her sleep. During his time of grief, parents and teachers at St. Jane provided support through the family’s mourning periods.

Jennifer’s best friend, Kristen, left her job as a teacher’s aide at St. Jane to become a baby-sitter for the Majchrzaks.

“The first year was not only tough on the kids, it was tough on him,” Kristen, 25, said of Mr. Majchrzak. “Because I was here so much, I knew their routines, their allergies, what they didn’t like, how they liked to be tucked in at night. I said, ‘no, the kids have been through enough.’ I was going to watch them.”

Falling in love as the worked to raise the children, Mr. Majchrzak and Kristen fell in love. They married in 2007. A sixth child, Tatum, joined the family last year.

“He said, ‘I asked Jesus and He said I should be honest,’” Mr. Majchrzak said. “He learned that from the school at any early age – the whole right from wrong. It’s from the people who are teaching at the school.”

Although Mr. Majchrzak continues to send his younger children to St. Jane, affording archdiocesan high schools will be a larger challenge. Allyson explored enrolling at The Catholic High School of Baltimore, but will attend a nearby public school.

This is the first in a series of articles featuring families making sacrifices for Catholic education
.