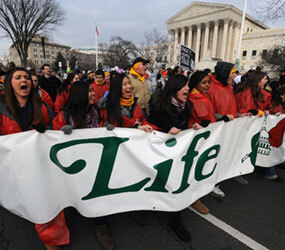 WASHINGTON – Despite overcast skies, the mood at the Jan. 22 annual March for Life in Washington was decidedly upbeat as speaker after speaker urged the crowd to keep up their efforts in the pro-life arena.

Several speakers told the tens of thousands on the National Mall – bundled in winter gear and holding aloft placards with pro-life messages or banners identifying where they were from – that they were now in the majority and would continue to make inroads in society and in government policies.

Although the rally’s opening prayer asked God to grant the march participants “the courage to be a voice for the voiceless,” this group hardly seemed to be lacking bravery. They showed stamina by simply showing up in vast numbers – many as repeat marchers – despite calls for sleet and freezing rain, which never materialized.

A glance at the banners across the mall showed that the participants included people from Texas, Michigan, Ohio and Massachusetts. The relatively subdued crowd cheered enthusiastically when speakers stressed that abortion should never have been part of health care reform legislation before Congress or when speakers criticized President Barack Obama’s support for legal abortion.

Nellie Gray, president of the March for Life Education & Defense Fund – the group that organizes the march – told participants that their presence at the 37th annual march represented a “whole new surge” for the pro-life movement to not only continue to educate government officials about the immorality of abortion but to also show a united front.

Those involved in the fight against abortion, she said, are not just working to change laws but are also giving support for pregnant women and women who have had abortions.

Several speakers highlighted the pro-life movement’s outreach efforts and urged participants to support pro-life doctors and pharmacists and to let members of their community know about the available pregnancy centers or post-abortion counseling programs.

With the U.S. Capitol in the background, 23 Catholic bishops and 21 members of Congress joined pro-life leaders on the rally’s stage.

Among the bishops were Cardinals Daniel N. DiNardo of Galveston-Houston, chairman of the U.S. bishops’ Committee on Pro-Life Activities, and Justin Rigali of Philadelphia. Several of the lawmakers were Catholic including: U.S. Sen. Sam Brownback, R-Kan.; Rep. Chris Smith, R-N.J., who is co-chairman of the House Pro-Life Caucus; and Rep. Anh “Joseph” Cao, R-La.

Cao led the group in a pro-life cheer and then urged them to “speak loudly for leaders to understand we are pro-life.”

He encouraged the participants to keep up their efforts, stressing that the “fight will be long and hard” and that young people, who made up a large percentage of march attendees, would need to see the efforts through.

Brownback told the crowd that “for the first time you live in a majority pro-life country” referring to recently released Gallup poll results showing 51 percent of American to be pro-life on the abortion issue and 42 percent of Americans as pro-choice.

“You have done it – persuading others – keep it up,” he said.

After the rally, participants walked to the Supreme Court where many planned to meet with their representatives to lobby for anti-abortion measures. The marchers talked with one another, sang and prayed as they made their way down Constitution Avenue.

As marchers were lining up in the street, Father Paul Hrezo, spiritual director for the college seminarians at the Pontifical College Josephinum in Columbus, Ohio, said it was important to be at this event “to be counted with others and give witness to what we believe.”

The priest, who is a veteran marcher, came with about 80 people.

Even though many marchers have made this event an annual one, some in the crowd told Catholic News Service that this march was their first.

Two women from Sts. Peter and Paul Parish in Turnersville, N.J., said they had never attended the march before because they weren’t quick enough to get seats on the parish-sponsored buses.

They were pleased simply to see the turnout. Theresa Ramsey, taking pictures of the crowd, said she was surprised to see people “coming from all directions.”

She also was confident that the sheer number of people had to make an impact, either in Washington or in their local efforts.

“Let’s hope people are listening,” she said as her friend nodded in agreement.