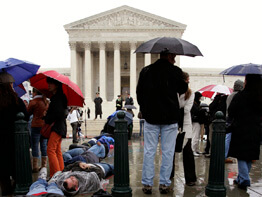 WASHINGTON – The Supreme Court upheld the Partial Birth Abortion Ban Act in a 5-4 decision April 18. The ruling was lauded by abortion opponents, including President George W. Bush, who called partial-birth abortion an “abhorrent procedure” in an April 18 statement from the White House.

“Today’s decision affirms that the Constitution does not stand in the way of the people’s representatives enacting laws reflecting the compassion and humanity of America. The partial-birth abortion ban, which an overwhelming bipartisan majority in Congress passed and I signed into law, represents a commitment to building a culture of life in America,” said Bush.

He signed it into law in 2003, but because of court challenges it never went into effect.

“The Supreme Court’s decision is an affirmation of the progress we have made over the past six years in protecting human dignity and upholding the sanctity of life. We will continue to work for the day when every child is welcomed in life and protected in law.”
While praising the decision, Cardinal Justin Rigali of Philadelphia, head of the U.S. bishops’ Committee on Pro-Life Activities, said: “The court’s decision does not affect the legal status of the great majority of abortions, and does not reverse past decisions claiming to find a right to abortion in the Constitution.

“However, it provides reasons for renewed hope and renewed effort on the part of pro-life Americans,” he said. “The court is taking a clearer and more unobstructed look at the tragic reality of abortion, and speaking about that reality more candidly, than it has in many years.”

Justice Anthony Kennedy, writing the majority opinion in the Gonzalez v. Carhart and Gonzales v. Planned Parenthood cases, said the law’s opponents “have not demonstrated that the act would be unconstitutional in a large fraction of relevant cases.”

In her dissenting opinion, Ginsburg said the decision “tolerates, indeed applauds, federal intervention to ban nationwide a procedure found necessary and proper in certain cases by the American College of Obstetricians and Gynecologists.” She added the decision “refuses to take … seriously” previous Supreme Court decisions on abortion.

Six federal courts had ruled the act had unconstitutionally restricted a woman’s legal right to an abortion. In October the Supreme Court accepted cases from California – the Planned Parenthood case – and Nebraska – the Dr. Leroy Carhart case. The high court conducted oral arguments in November.

In what the law calls partial-birth abortion, also referred to as an “intact dilation and extraction,” a live fetus is partially delivered and an incision is made at the base of the skull, through which the brain is removed, and then the dead body is delivered the rest of the way.

In the 1990s, Congress had twice passed a ban on partial-birth abortions. Both times the bills were vetoed by President Bill Clinton.

In 2000, the Supreme Court struck down a Nebraska ban on partial-birth abortions. Writing for a 5-4 majority at that time, Breyer said the law imposed an undue burden on a woman’s right to make an abortion decision.
Chief Justice William Rehnquist, who died in September 2005, and now-retired Justice Sandra Day O’Connor were both on the high court at the time this ruling was issued. O’Connor sided with the majority, and Rehnquist with the minority.

In 2003, Congress again passed a ban on partial-birth abortions, and the bill was signed into law by Bush.

Kennedy’s majority opinion said there was “medical disagreement whether the act’s prohibition would ever impose significant health risks on women” – a prohibition based in significant part on the finding that the procedure was never medically necessary – and that other procedures exist to abort late-term pregnancies.

During the November oral arguments, Solicitor General Paul Clement, who argued for the federal government, said Congress had sufficient evidence that “partial-birth abortions were never medically necessary, and that safe alternatives were always available such that no woman would be prevented from terminating her pregnancy. As a result, Congress was entitled to make a judgment in furthering its legitimate interests that they were going to ban a particularly gruesome procedure that blurred the line between abortion and infanticide.”

A brief separate opinion written by Thomas and joined by Scalia said they wanted to reiterate their view that “the court’s abortion jurisprudence … has no basis in the Constitution.”

In statements issued April 18, abortion opponents rejoiced in the decision.
“Granted this is a very small step, but it is the first step away from a society that looks at the life of an unwanted, unborn child as nothing more than a problem that needs to be disposed of, and the first step toward a society that respects and values all human life,” said a statement by former Republican Sen. Rick Santorum of Pennsylvania, author of the Partial Birth Abortion Ban Act.

“When drafting this legislation, we were confident that it would withstand constitutional scrutiny and today’s ruling confirms that belief,” said a statement by Rep. Steve Chabot, R-Ohio, who sponsored the bill in the House. “Our legislation was supported by an overwhelming bipartisan majority in Congress, signed into law by the president and has now been upheld by our highest court.”

In praising the decision, Father Frank Pavone, president of Priests for Life, said: “Congress and the vast majority of state legislators and American citizens have made it clear over the last decade that this procedure – by which a child is killed in the very process of delivery – has no place in a civilized society.”

“Finally,” said National Right to Life Committee legislative director Douglas Johnson, “it is illegal in America to mostly deliver a premature infant before puncturing her skull and removing her brain, which is what a partial-birth abortion is.”

“I am encouraged by the important strides made by the court today,” said Mailee Smith, staff counsel of Americans United for Life. “The court sent the message that it will not strike down abortion regulations simply because they are abortion regulations.”

“We are waiting for the anti-Catholic bigots to go bonkers over the fact that all five of the justices who voted against infanticide are Roman Catholic,” said a statement by William Donohue, head of the Catholic League for Religious and Civil Rights.