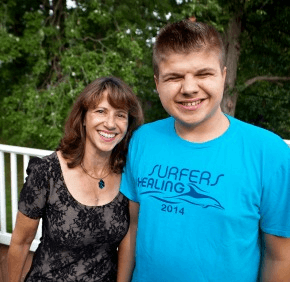 By Lisa Harlow
Special to the Review
When Trish Kane’s son, Eric, was diagnosed with autism at the age of 2 some two decades ago, there was very little information for families about the developmental disorder.
Now, with services – including sacrament preparation – more widespread, Kane said it is a matter of choosing what’s best for your child.
“Early intervention is so important,” said Kane, 56, “but when Eric was young, the availability of programs was limited and not always financially accessible to families. It was a struggle. As more people got diagnosed, there were more resources out there.”
At that time, Kane felt she had to do something, and that something turned out to be walking.
“Back then, I got involved in national walk efforts for autism that focused on raising money to find a cure,” she said. “I felt like that was my way of doing something to help people.
“As Eric grew up, I got more concerned with giving him opportunities to be successful as an adult. I shifted into a more local, practical effort.”
In 2010, Kane joined the board of the Abilities Network, a non-profit organization that provides individualized services such as job placement and daily life skills training to people in Maryland with disabilities.
Her first project was the organization’s largest fundraiser, the Walkabout Abilities. This year she is co-chair of the eighth annual event, being held Sept. 21 at Goucher College. Last year, Walkabout Abilities raised $54,000, and this year’s goal is $67,000.
Kane’s team, “Team My Buddy,” was the top fundraiser last year. Named for Eric and his friend, Nick Myers, who also has autism, Team My Buddy has approximately 30 members.
Because she has many years of experience dealing with services, Kane often gives the following advice: “Find an organization that works for you and your child, an organization that offers the level of resources you need. While early intervention is important, it doesn’t stop there.”
Eric, now 20 and enrolled in a special program at Parkville Senior High School, is low-verbal and moderately to severely impacted by his autism. At 21, he will transition from school to adult programs and employment.
“In Eric’s case, low-verbal does not mean low intelligence,” said Kane, director of programs for Pathfinders for Autism. “Always presume intellect. Eric is a computer whiz, and he knows more foreign languages than most people.”
Parishioners of St. Isaac Jogues in Carney, Kane and her husband of 33 years, Jack, had always wanted Eric to make his first Communion.
“But he was not able to sit in a traditional classroom for preparation,” she said. “People couldn’t really understand that. We knew he needed an adapted curriculum.”
Kane approached Deacon William Fleming, director of the Office of Disabilities Ministry for the Archdiocese of Baltimore. Using training tools designed specifically for individuals with special needs, Eric received his first Communion at St. Isaac Jogues when he was 18.
“We decide what preparation program is best for each individual,” Fleming said. “In the case of non-verbal or low-verbal candidates, parents usually know when a person is ready, when they show a certain reverence or understanding.”
“There was a time we couldn’t take Eric to church,” Kane said, “but now the music is very engaging to him. It’s welcoming. Now Eric never misses Mass.”
Walkabout Abilities to benefit the Abilities Network
Goucher College, Dorsey College Center, 1021 Dulaney Valley Road, Towson
Sept. 21, registration at 8:30 a.m., two-mile walk starts at 9 a.m.
$15 for 12 and up; $10 for children under 12; free for 3 and under
Includes T-shirt, refreshments and post-walk activities, arts and crafts, performance by Nelly’s Echo, sensory workshop, airbrush face painting.
For more information, visit abilitiesnetwork.org or call 410-828-7700 ext. 1298
Also see:
Man’s Walk Across America raises funds for Good Shepherd Services
Longtime Mercy volunteer concludes five decades of service
PrevNext