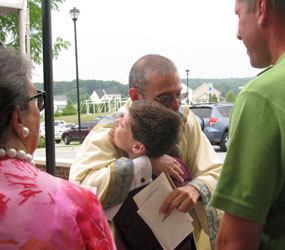 Parkton – Monsignor Nicholas P. Amato walked in front of the Our Lady of Grace congregation June 12 and raised a tissue, acknowledging an emotional moment for the priest celebrating 40 years since his ordination.

He was also saying goodbye to the Parkton parish he led as pastor for the last 15 years. Monsignor Amato is retiring from active ministry to direct contemplative retreats, parish missions across the archdiocese and days of recollection.

He saw friends, family and colleagues and, as Mass concluded, they extended their hands toward him as the parish’s choir, sang prayerfully.

“It’s really not about me, it’s about us and the relationships we formed over those years,” a gracious Monsignor Amato told them.

Serving as a principle concelebrant with Monsignor Amato was his longtime friend Monsignor G. Michael Schleupner, pastor of Bel Air’s St. Margaret parish. Priests from across the archdiocese also concelebrated.

After meeting with parishioners outside the church, Monsignor Amato was celebrated in the parish hall, the Manor at Gunpowder Falls, during a dinner.

The priest’s 40 years of service were highlighted during a slideshow. He was first assigned as an associate pastor of St. Patrick in Cumberland and as a chaplain for the town’s Bishop Walsh School.

During the late 1970s and 1980s, he served as secretary of the Department of Education for the Archdiocese of Baltimore. During that time, some schools began clustering and regionalizing and there was a greater focus on improving overall education.

Following his role as secretary, Monsignor Amato took on his first pastor role in the early 1990s at Shrine of the Sacred Heart in Mount Washington. Then, in 1995, he was assigned to the rural Our Lady of Grace, in Baltimore County.

The parish built an education center, a luxurious hall, a youth ministry center, a reading center, an activity center, athletic fields and a pavilion, plus a memorial courtyard and fountain.

“The joy of being a pastor or the father of this family,” Monsignor Amato said, “is the relationships that were formed and those relationships were formed because of the facilities that made that happen so much more easily. It’s not buildings first or campus first. It’s people first and then getting what they need to interact in their love of faith and Jesus Christ.”

Our Lady of Grace School is one of the few parish schools built in the last decade. Principal Byrdie Ricketts said Monsignor Amato delivered homilies that resonated and fostered a prayerful atmosphere for parishioners and students.

“We are better people for knowing you and we love you dearly,” Ricketts said. “We will miss you dearly.”

Known for his boundless energy, Monsignor Amato is also a master of the culinary arts and many parishioners raved about cookouts and lasagna dinners at the pastor’s home.

Schleupner said the next phase of Monsignor Amato’s life will have long-ranging importance.

“We, as a church need that kind of prayer and spirituality now more than we’ve ever needed it,” Monsignor Schleupner said. “He’s shown the vision and, God knows, he has the plan… to make that vision be a reality.”