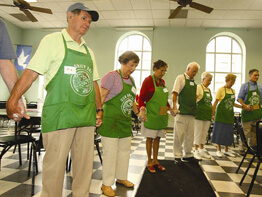 Immaculate Conception, Towson, parishioners have been serving the poor and homeless at Our Daily Bread on the first Sunday of each month since Baltimore’s largest soup kitchen opened more than a quarter century ago. Fittingly, church volunteers were also present June 3 as they served 678 meatloaf dinners during the last supper at the Cathedral Street facility.

The parish has served Our Daily Bread longer than any other group in the Archdiocese of Baltimore, and Catholic Charities officials were thrilled when the final day at the former location occurred on Immaculate Conception’s Sunday.

As Robin Braxton waited outside of the building under an umbrella, the homeless Baltimorean who eats at ODB every day smiled when she learned the 36 volunteers were serving meatloaf – one of her favorites. The group has been preparing the homemade meal for the past 15 years.

Though some of the volunteers said they will miss being next to the Basilica of the National Shrine of the Assumption of the Blessed Virgin Mary, Baltimore, when they take their mission to the new building next month, they agreed the venue isn’t what is important, it’s the people they serve that matters.

Coordinated by Paul and Jo Miller of Towson since 1981, the Immaculate Conception crew started off in the original Franklin Street row house with eight volunteers serving less than 200 hungry Baltimoreans casseroles each first Sunday.

“Every month I worry that we won’t have enough meatloaves, but it always works out well,” she said. “With 105 meatloaves and everything else that we serve up, it takes about five cars to haul it all down each month.”

Though Immaculate Conception parishioner Fran LeMire of Towson said he has some sentimental attachments to the Cathedral Street facility – which will get a $3 million overhaul to transform it into a day shelter for homeless women and children – he said the new building offers easier access for the carloads of food each month.

“The people here are just motivated to do a good job to meet the needs of these people,” Mr. LeMire said. “We’ll adjust to the new facility. But, it’s an honor to serve the final meal here.”

Among the 36 volunteers and 36 substitutes in the Immaculate Conception crew, a few are parishioners from other churches in other religions denominations, including William and Maureen Nelson of Grace Fellowship Evangelical, Timonium, who have served with the parish at ODB for the past decade.

As Mr. Nelson of Timonium whipped up mashed potatoes in the cramped kitchen facility of the Cathedral Street location, he said he was looking forward to having more room in the state-of-the art kitchen at the new building, which is triple the size and is complete with three refrigerators, two walk-in freezers and food warmers.

When Ms. Miller first started volunteering at Our Daily Bread in 1981, she had hoped her services wouldn’t be needed after a few years, but instead the volume of people they serve has nearly quadrupled, along with their numbers of volunteers.

“We have a lot of wonderful memories being next to the Basilica and it was great being there,” she said. “But, we’ll carry the spirit over to the new place.”

“I’m looking forward to going to the new place,” Ms. Braxton said as a volunteer served her a steaming plate of food. “I may have to walk a few more blocks, but that will be good exercise and there are more police down there ‘cause it’s next to the prison, so it’ll be safer.”