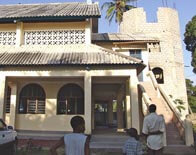 For almost 10 years, the people of St. Stephen, Bradshaw, have had a special relationship with the parishioners of St. Steven in Mombasa, Kenya. So when St. Steven could only finish two floors of a church addition they were building, they called for help from their friends across the ocean.

The parishioners of St. Stephen were eager to buy the wood carvings sent over from Kenya to support the tower building fundraiser. According to Mary Bauer, committee chairperson for the Kenya partnership committee, the parishioners loved the carvings and the fundraiser was a success. The parish has had many generous donors who have given thousands of dollars toward the building project, a church addition of a large tower with four floors and a bell at the top.

So far the people of St. Stephen have raised some $12,000 for their friends in Kenya. Ms. Bauer said it is important for her parish to be involved with another parish outside of the United States because the exchange of cultures is so important to their faith development.
“It’s important to see the faithful that live in other places,” said Ms. Bauer. “They depend on their parish. It’s a safe place for them to go even though they have to walk miles to get there.”

The tower building will have space for a sewing room, offices, community center and extra rooms for visiting priests or guests. At the very top of the tower will be a bell to signal Mass is starting.

Ms. Bauer said the people of St. Steven’s don’t have modern conveniences but continue to be joyful and grateful for everything they do have and are given. She said this partnership has brought the people of her own parish closer together and helped them to grow spiritually.

“I think it’s very important for us to realize the church on a global level and to see the commonalities in our faith,” said Duffy Laws, a member of the Kenya partnership committee, who has traveled to St. Steven in Kenya. “We are called as Christians to feed the poor and hungry.”

The parishioners have raised money to help pay for the roof, floors and benches of St. Steven’s church, which was completed in 2000. They have also helped start a vitamin program for the children in the parish to make sure they are receiving proper nutrition.
Ms. Bauer remembers that after having a fundraiser to provide the children with simple shoes to wear, a picture of all of the children holding up their new shoes was returned to St. Stephen.

“We as a parish have learned more from them. Spiritually they have given us so much,” said Ms. Bauer. “Despite the hardships, they are the most joyful people.”