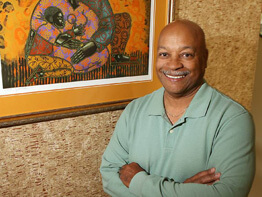 Every third Tuesday of every month Arthur Jasmin and a few of his fellow parishioners from St. Gabriel, Woodlawn, feed the hungry in Baltimore City.

“I just said sure,” he said with a laugh. “I was a little nervous about it though.”
Mr. Jasmin said he helps prepare the food. Whenever he works, the menu normally consists of meatballs, mashed potatoes and gravy, and string beans. He works in an assembly line of people. He puts the meatballs on the plate and passes it to the next person who places a portion of string beans next to the meatballs and so on until the plate is covered with food.

Mr. Jasmin said he doesn’t have much interaction with the visitors because he is almost always in the kitchen, but every once in a while someone will come back to the kitchen to thank him for the food.

“It gives you a special feeling,” said Mr. Jasmin, who was recently named as an advocacy winner for his volunteer work in the community and his parish. “It’s important to volunteer because you are helping someone else.”

He is also involved in other areas of the parish, including ushering for the 10:30 a.m. Sunday Masses, acting as a member of the social action committee and helping load donations from parishioners on to the St. Vincent de Paul truck.

For Mr. Jasmin helping others is just “the right thing to do” and people should be more involved in their parish and community. By serving people and the parish he is doing God’s will, he said.

“I enjoy going down there and seeing guests and preparing the food,” he said. “You don’t really have to volunteer for things, but if I didn’t want to do it I won’t.”