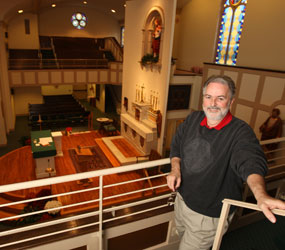 History is one of the big reasons Jerry L. Harlowe joined St. Paul in Ellicott City when he entered the Catholic faith in 2006.

“You walk into the place and it just drips with history,” said Harlowe, a 62-year-old retiree who worked for the Social Security Administration.

“It covers almost all the bases,” he said, “from having a servant of God who was a parishioner there to having Babe Ruth get married there.”

Harlowe has taken his interest in history a step further by accepting his pastor’s invitation to serve as the official parish historian. He started a speaker series to educate people on the history of the parish, the wider community and the church at large. He also started a 15-member history committee that is conducting a survey of one of the old campus buildings and plans to conduct oral histories with older parishioners beginning in January.

Harlowe has produced several written items that he sent to the archdiocesan archives.

It was in researching St. Paul’s memorial stained glass windows that Harlowe was inspired by some of the parish’s famous parishioners. They include Admiral R.H. Wyman, a 19th- century commander of the North Atlantic squadron of the U.S. Navy, and Mary Virginia Merrick, the nationally known founder of the Christ Child Society who was recognized by the Vatican as a “servant of God” – the first step on the path to sainthood.

Harlowe said he has been interested in history throughout his life. He believes it’s vital to raise awareness about the past.

“It’s not only for the beauty of the simple history itself,” he said, “it’s to remember those people who actually brought us to the point that we are today – for us to realize we have to do the same for the people of tomorrow.”

As part of the parish history committee’s speaker series, Archbishop Edwin F. O’Brien will address the role of the chaplain in the military on Nov. 11 at 7 p.m. at St. Paul.