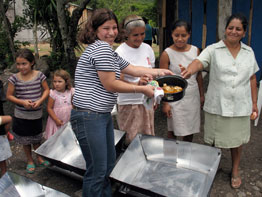 JINOTEGA, Nicaragua – Many people know her simply as “the tortilla lady.”

Elena Pineda, a single mother of three grown sons and a 14-year-old daughter named Olga, makes a living selling corn tortillas she presses by hand in the mountain community of Jinotega.

Mrs. Pineda, like many Nicaraguan women, had been using a wood-burning stove that filled her kitchen shack with a noxious cloud of smoke, caking the walls with a permanent black, sooty residue.

It was enough to bring tears to Sue Kellett’s eyes when the member of St. Edward Parish in Bloomington, Minn., first visited Mrs. Pineda’s home during one of her frequent mission trips to Nicaragua.

“The smoke was billowing out of the old stove when I met her,” Mrs. Kellett said. “My eyes were watering and I started coughing. … I couldn’t believe anyone could work under these conditions.”

Mrs. Kellett knew she had the perfect candidate to test the latest prototype of a “healthy” smokeless cook stove she is developing. With the new stove, Mrs. Pineda can make more tortillas, faster, using less firewood and without breathing harmful fumes.

Now Mrs. Pineda is the one who gets tears in her eyes when Mrs. Kellett comes to visit her.

“This stove has changed her life in so many ways and she’s so grateful for this special gift,” Mrs. Kellett said. “She wants a better life for Olga and is so happy that maybe with this help she will be able to send her to school and prepare her for a better job in the future with the money she saves.”

Mrs. Pineda is one of thousands of people, both in Nicaragua and in Minnesota, whose lives have changed as a result of a partnership between St. Edward and Our Lady of the Angels Parish in Jinotega.

Mrs. Kellett was part of a group of archdiocesan and parish leaders who recently traveled to Nicaragua on a 12-day mission trip organized by the Archdiocese of St. Paul and Minneapolis Center for Mission and Catholic Relief Services in Managua, Nicaragua’s capital. A reporter from The Catholic Spirit, the archdiocesan newspaper, also made the trip.

Across the Archdiocese of St. Paul and Minneapolis, about 35 parishes have built relationships with parishes in other parts of the world, according to Mike Haasl, archdiocesan global solidarity coordinator. A dozen other parishes, he said, are exploring the possibility of forming long-distance relationships, sometimes referred to as “parish twinning” or “sister-parish relationships.”

Many Twin Cities churches partner with churches in Central America because of its proximity to the United States, but partnerships also exist with churches in Jamaica, Kenya, the Dominican Republic and other countries.

“I think it is a new way of mission,” Mr. Haasl said. “People in the pews themselves are engaging in mission, which is the baptismal call.”

As members of a universal church, Catholics are called to be in relationship with other Catholics throughout the world, Mr. Haasl said. Sister parishes are an effective way to develop these bonds, he added.

St. Edward parishioners began exploring the possibility of a sister-parish relationship in 1987, said Mrs. Kellett, one of the original members of St. Edward’s sister-parish committee.

In 1988, the Bloomington parish sent two laypeople, a staff person and then-pastor Father Martin Shallbetter to visit Jinotega, located in the mountains about 125 miles northwest of Managua.

The visitors encountered a community of roughly 40,000 people reeling from the Nicaraguan civil war of the 1980s, Mrs. Kellett said. Most of the fighting between the contras and the Sandinistas that claimed an estimated 60,000 lives occurred in the hills surrounding that region.

In the early years of the sister-parish relationship, St. Edward mainly provided financial support to Our Lady of the Angels to assist with war-recovery efforts. Gradually, the relationship deepened, Mrs. Kellett said.

In Jinotega, St. Edward has helped establish a dental clinic; provided liturgical vestments, missals and other liturgical items; given oxen and seeds to farmers; funded and constructed homes and chapels in remote villages; contributed funding for a new roof on the church; dug wells that provide potable water for 600 families; donated clothing, school supplies and medicines; trained midwives; and provided hundreds of solar ovens for families.