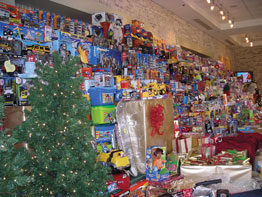 Monsignor Damien Nalepa, the pastor at St. Gregory the Great, sees the best in humanity – and the Archdiocese of Baltimore – every Christmas season.

Hundreds descend upon his West Baltimore parish with boxes of toys, clothes and food. With each Mid-December donation to the church on North Gilmor St., there are hugs and smiles shared between urban and suburban parishioners who have helped make the Adopt-A-Family program a 25-year success story.

Though these people may live in starkly different parts of the archdiocese, they believe they are guided by the Gospel and its call to help the less fortunate. This year was no different, as 1,400 gifts arrived at St. Gregory for distribution to the poor.

“It’s just astronomical when you think of the generosity of the benefactors,” said Monsignor Nalepa. “People look to the Church for assistance all year long.”

Even in the current economic turmoil facing the nation, the season of giving held true to its name in 2008, as churches from Western Maryland to Harford County found innovative ways to help the oft-forgotten members of society.

Twenty parishes, including sister parish Holy Family of Davidsonville, worked with St. Gregory this year to sponsor families with children and provide warm clothes, food and toys to brighten their lives.

Holy Family parishioners ignored their own economic worries to deliver 30 trucks full of gifts to St. Gregory Dec. 20. In total, Holy Family program organizer Audrey Bush?e said 125 families were adopted and an entire wall at the parish was covered with donations.

“It’s a big effort, but it’s also a lot of fun,” Ms. Bush?e said. “I’m real proud of our church that we’re doing this every year.”

Here’s just a sample of giving elsewhere in the archdiocese this season:

St. Ignatius’ Angel Tree program featured 100 parishioners bringing one toy and one piece of clothing for each of the 50 children helped by the program, which assists children of people in prison.

Co-organizer Dan D’Orazio said, “It’s certainly something nice for the inmates to have. There’s so much outreach that happens out of the church, we’re happy to be a part of it. It’s a very socially conscious parish.”

St. Ignatius parishioners also participated in a program that drives around downtown Baltimore, giving soup, sandwiches, coffee and fruits to the poor. During those trips in late December, the parish also distributed hundreds of warm hats, gloves, scarves, socks, underwear and toiletries.

St. Wenceslaus of East Baltimore held a Dec. 14 Christmas party for neighborhood children and distributed gift baskets to less fortuante families. It also held a Breakfast with Santa for parish and local children.

Sodality members of St. Matthew in Northwood visited with the homebound and those in nursing homes. Cub Scout Pack 648 collected toys for Kindertime Toy Drive and Baltimore Free Store as well.

Hampden’s St. Thomas Aquinas had a Jesse Tree to collect men’s and women’s clothing while the church also reached out to the Greater Baltimore Center for Pregnancy Concerns with supplies and handmade infant clothing.

Christmas at St. Thomas Aquinas, as Deacon Richard “Monti” Montalto expressed, “is a very holy event because what we try to do is express the love of God the father with the gift of his son Jesus.”

Parishioners of Our Lady of Sorrows, West River, prepared food baskets for 104 families, 81 of which had children who received clothing and toys. St. Jerome of Baltimore, Our Lady of Sorrows’ sister parish, had another 80 families receive gifts.

“We have about 30 volunteers to sort and prepare the baskets,” parishioner Diane Wittschack said, “but parishioners buy the children’s gifts and bring non-perishable food or contribute to the poor box or fresh food items.”

The School of the Incarnation in Gambrills collected $16,000, which Giving Back, Inc. used to purchase clothing, toiletries and backpacks. Students at the school then placed the items in the backpacks, which were to be distributed to those in need in the city on Christmas Eve.

Timonium’s Church of the Nativity Giving Tree Program resulted in a wall of toy donations that featured a wreath full of gift cards, trees decorated with boxed Barbie dolls, new bikes and rows and rows of toys. That was only scratching the surface, however, as more bags of clothes, food and supplies were stored in offices as well.

“It’s an opportunity to send a message to those we’ve adopted of Christ’s love coming into their lives,” organizer Mary Knudsen said.

Halethorpe’s Church of the Ascension had parishioners deliver to 27 families food baskets with gift certificates included. Seniors also helped out fellow parishioners in need, while others made food for Our Daily Bread.

St. Ignatius in Hickory continued to expand its generosity this year.

“We are especially busy during Advent, with many of our parishioners looking for ways to assist those in need during the holy season,” said Deborah Czawlytko, the parish’s pastoral associate.

Other gifts from St. Ignatius were taken to poor families in Harford County.

The hall at St. Peter the Apostle in Oakland was used by parishioners and a local rotary club to gather gift baskets for those in need. A Christmas party and dinner for poor children was also held.

Monsignor Thomas Bevan, pastor, said the St. Vincent de Paul chapter is “a legacy of the parish. We are reaching out to others.”

Fellow Cumberland parish Ss. Peter and Paul identified about 200 children in 75 poor families in Allegany County for gifts. In the last two years, the program took on a shoe collection program for 100 children. There were also 49 families participating in the parish’s Giving Tree Program.

“The project has grown over the years and is truly a blessing to our community,” said Darlene Collins, volunteer coordinator for the Giving Tree project. “Every year, more and more people offer to help and we are able to help so many, many children in our area.

“This is the most joyous project I have ever been involved with in my many years at Ss. Peter and Paul Church.”