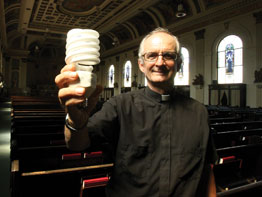 They call him Recycle Sam, although his name is Ross. The pastor of St. Casimir, Canton, earned the nickname for encouraging his parishioners to recycle.

“While at times it is an inconvenience,” said Father Ross M. Syracuse, O.F.M. Conv., “it is amazing to see how much recyclable material we actually use.”

The parish put recycle containers in place, holds daily Mass in the chapel instead of the church to save energy, installed programmable thermostats, replaced school windows with energy efficient ones, and replaced light bulbs with a more energy efficient type.

“This is another ‘no-brainer’ way to turn green,” Father Syracuse said.

The thermostats have been one of the parish’s biggest energy savers, said the pastor – it’s convenient to have boilers or air-conditioning units automatically turn on and shut off.

“Too often,” he said, “it’s easy to forget to turn something on or off.”

Over 11 years, the St. Casimir faith community has tried to do its part to protect and preserve what has been entrusted to us from God.

“As Franciscans,” said Father Syracuse, “we are called in a special way to care for creation and the environment in the spirit and example of St. Francis of Assisi.”

“The Abitibi Paper Retriever is well-used,” said Valerie Herrington, coordinator of youth and young adult ministry. “Our bin is picked up every two weeks.”

The parish also recycles cans and plastic bottles, and through its social justice committee, offers informal programs to educate various age groups to care for the earth and stay aware of environmental impact issues, said Ms. Herrington. Information is filtered through homilies and youth ministry and religious education lessons.

Abitibi bins are peppered throughout the archdiocese in 22 locations, the company reported. Organizations earn a small sum per ton of paper from Abitibi.

Other parishes are on the green bandwagon, too, including those holding bicycle drives – another solution to keeping piles of material out of landfills.

A Knights of Columbus arm of the Catholic Community of St. Francis Xavier, Hunt Valley, held a used bicycle drive after Masses during the weekend of Aug. 16-17. The bikes were refurbished and donated to inner-city parishes, including St. Francis Xavier’s sister parish, St. Gregory the Great. The parish also began paper recycling recently, also with Abitibi.

“Parishioners,” said Kathy Glass, secretary, “are just so great about bringing their newspapers.”

The parish has earned more than $700 in one year from Abitibi, and was also awarded $200 for winning an Abitibi contest.

Like St. Casimir, the parish has replaced light bulbs with energy efficient ones, insulated the parish center and installed programmable thermostats.

As a whole, the archdiocese has plans to turn greener and stay on a path of conservation. The facilities and real estate division is in the process of forming a green council, already supported by Bishops Mitchell T. Rozanski, eastern vicar, and Denis J. Madden, urban vicar, who will serve on it, along with priest representatives from various parishes.

Nolan McCoy, the division’s director, wants to be the first green archdiocese in the United States.

“It is each parish and school’s responsibility to take care of the earth we have been entrusted with,” he said. “We should all have a goal to reduce the amount of resources we consume while fulfilling our ministries. That includes energy, water and materials we put out to landfills. Anything we can do to save a single kilowatt will be for the benefit of the archdiocese.”

The first step is to establish a baseline of the archdiocese’s performance in its 16 million square feet of space and several thousand buildings.

“To know if you’re getting better,” said Mr. McCoy, “you have to know how you’re performing.”

Parishes and schools will be visited so as to identify kilowatt consumption used per square foot – who has the best practices and who is using the most energy.

“We can help them put technologies into place,” said Mr. McCoy. “It’s our moral obligation, our responsibility, to protect the earth for future generations.”