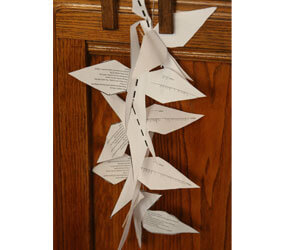 Parishes and schools throughout the archdiocese are pulling together to pray for and help the people of Japan following the March 11 earthquake and tsunami that struck the island nation.

Children in the lower school at Our Lady of Mount Carmel School in Essex recently crafted 1,000 origami cranes as a symbol of their prayers for the people of Japan. They were inspired by Eleanor Coerr’s “Sadako and the Thousand Paper Cranes” and a Japanese saying that a person who makes 1,000 paper cranes would be granted a wish.

Some of the cranes were used in a March 28 prayer service for Japan at Our Lady of Mount Carmel. The students also sacrificed snack money to raise money for Japanese emergency outreach provided by Baltimore-based Catholic Relief Services (CRS).

Children in the junior and high school youth groups at St. Ursula in Parkville are planning to hold a short prayer service for Japan beginning at 7:10 p.m. on April 15 in the school hall. They will be collecting donations at that time to support the Sisters of Notre Dame de Namur, the same religious community that ministers at St. Ursula.

At Mount St. Joseph High School in Irvington, students are designing bracelets that will be sold for $5 each to support relief efforts. The student council is organizing a car wash, and a group of students and teacher who traveled to Japan last summer is organizing a dinner in late April featuring traditional Japanese cuisine.

Melissa Lees, director of campus ministry at the College of Notre Dame of Maryland in Baltimore, coordinated campus contributions to support CRS. She sent a campus-wide alert with a link to the CRS Japan page. The campus ministry also put out donation boxes and held a bake sale. A prayer service was held March 18.

Parishioners of St. Peter the Apostle in the Western Maryland community of Oakland sang the “Japanese Blessing Song” at all their Masses during the past two weekends and held a special collection for Japan.