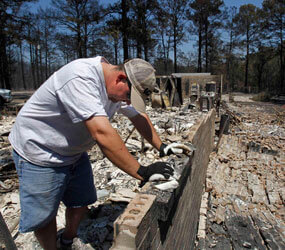 WASHINGTON – Ascension Parish in Bastrop, Texas, has been serving as a shelter and a nerve center for relief efforts related to the ongoing Texas wildfires that have struck the state.

As of Sept. 7, wildfires had been recorded for 296 straight days in drought-stricken Texas. But in the recent surge of such blazes in early September, more than 1,000 homes in the state had been destroyed and four deaths were attributed to the fires.

“We’re not turning anybody away,” said Steve Venzon, one of four Ascension parishioners who are taking daily six-hour shifts in directing aid efforts at the church. The town of Bastrop and Bastrop County are in the heart of the fire zone in the 25-county Diocese of Austin, Texas.

Venzon added that the religious education building had cots laid out for 200, and was expecting an upsurge in evacuees with the closure of a Red Cross emergency shelter. He said the parish, the Red Cross and the Federal Emergency Management Agency were coordinating efforts; with a Sept. 7 federal declaration of disaster status for wildfire-stricken areas, FEMA is able to marshal more resources to help those affected by the fires.

If the religious education building fills up with evacuees, Venzon said, they would return to the parish hall to add bed space. “After that, God help us,” he added.

Venzon said the pastor, Father Rafael Padilla Valdez, was in the first week of the first parish assignment of his priesthood when the wildfires hit. “He’s done a remarkable job,” he said.

Christian Gonzalez, communications director for the Diocese of Austin, said the wildfires were a combination of drought and heat – the Austin area has recorded more than 80 days of highs in the 100s this year – plus an ironic source: Hurricane Lee.

While the tropical storm never drenched Texas, it came close enough for its winds to “suck out some of the moisture we did have” in the air, Gonzalez said.

He added that residents made donations at the Austin diocesan pastoral center during the morning and afternoon rush hours Sept. 6, and that some radio stations in the Texas capital conducted on-air drives Sept. 7 for donations, with the proceeds going to Catholic Charities.

The diocesan website, http://www.austindiocese.org, has a large orange “donate” button on its home page to allow individuals to make contributions.

Melinda Rodriguez, executive director of Catholic Charities of Central Texas, told CNS Sept. 7 that other important donations included warehouse space and 18-wheel trucks to haul donated goods to the warehouse so that they can be sorted and distributed to those in need.

“We’re waiting for organizations like FEMA to get established so we can leverage our own resources most effectively,” Rodriguez said.

She added that firefighters have had difficulty in containing the wildfires, which have scorched tens of thousands of acres. “We’ve been told they’re jumping roads and lakes and other natural barriers,” Rodriguez told CNS.

In Bastrop, Venzon said he did not know the fate of his own house, where he lives with his wife, two grown sons and four grandchildren.

“It was (standing) yesterday. I don’t know,” Venzon said Sept. 7. “The fire got within a few blocks. The cops blocked it (access) off. It (the fire) was jumping the streets.”