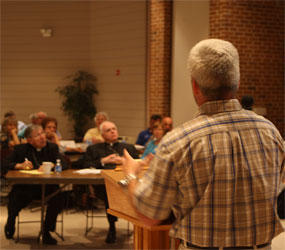 FULLERTON – As parish council president of St. Isaac Jogues in Carney, Tom Dauses constantly contemplates ways his faith community can thrive in the 21st century. Surrounded by archdiocesan parish leaders July 5 and 6 at St. Joseph in Fullerton, he was not alone in pondering the future.

During the last several weeks, archdiocesan leaders have held “parish planning” meetings to address lingering concerns, such as clergy and financial shortages, low Mass attendance and participation levels, as well as the education of all Catholics.

The meeting at St. Joseph was the last of eight with parish leaders. Split into four regions, parish representatives attended two meetings each. Archdiocesan officials also gathered with lay leaders inside the Catholic Center, the archdiocese’s Baltimore City headquarters.

“Just meeting the people at my table, who were almost all parish council presidents, it was phenomenal” Dauses said. “We could have spent a whole Saturday just throwing around ideas that we talked about.”

In the months leading up to the meetings, Archbishop Edwin F. O’Brien wrote several columns for The Catholic Review saying archdiocesan Catholics will face tough changes, including possible parish closures.

In his introductory remarks during a July 6 meeting, the archbishop told parish leaders their ideas would help shape plans moving forward.

The first night of the regional meetings was for questions and discussions, while the second was about sharing ideas with Archbishop O’Brien and auxiliary Bishops Denis J. Madden and Mitchell T. Rozanski. The three bishops listened to the ideas presented and wrote down many notes. Afterward, they thanked the parish leaders for their input.

“Having the bishops and the archbishop here just listening was great,” Dauses said. “I really felt they were (listening). We all said at our table that we hope some guidance comes down.”

Communication was a recurring theme by parish presenters throughout the evening.

Terry Palazzo, the parish council president of St. Mary in Pylesville, advised the bishops to be consistently candid.

“Be honest,” she said. “There’s nothing more important than honesty. You have to give people the facts. They have to understand what it is because if you don’t know what the problem is, you can’t deal with it.”

Almost uniformly, attendees said neighboring parishes should work on sharing resources, programs and personnel. Increasing Mass attendance and creating vibrant worship experiences were of chief concern. Many recommended that priests should be freed to address the spiritual and sacramental needs of the parishes, while laity handle as much administrative duties as possible. Some called the priest shortage a “crisis” and called on parishes and families to promote vocations.

Archbishop O’Brien said changes during recent decades “mean we’re going to have to take a look at every aspect of the resources God has given us and weigh them, balance them and come to some decisions that will affect us for a few more decades to come.”

The archbishop said the main concern is growing the archdiocese and the faith and “to bring together the resources God has given us and the talents he’s given us and to build on them and not just let things ebb away by no decisions.”