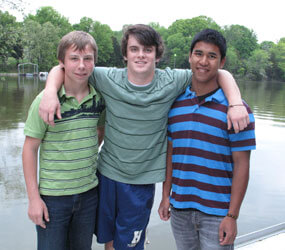 NASHVILLE, Tenn. – In the wake of the international media frenzy surrounding the story of a Tennessee woman who recently sent her 7-year-old adopted son back to Russia unaccompanied, Carrie Krenson of Nashville’s Cathedral of the Incarnation is eager to share her “boring old story” of adopting two children from Russia.

“I really feel sorry for everyone involved in that case,” Krenson said. “Ninety-nine percent of the time, things work out so differently,” she said.

The Krensons, who adopted daughter Dasha, 10, and son Evan, 8, from Russia, have a large network of friends who have built their families through successful international adoptions. To those considering adopting from Russia or another country, she advises, “Don’t let the big stories scare you away.”

Krenson said she and her husband, Cathedral of the Incarnation Deacon John Krenson, “were fully attached from day one” to their children, whom they adopted at separate times from a government-run orphanage in Russia.

Dasha was in infant when her adoption was finalized; Evan was 17 months old. Because Evan spent longer in the institution, he has had some developmental delays and was small for his age when the Krensons first brought him home.

The family chose to adopt from Russia, Krenson said, because it had one of the most established international adoption programs at the time and a shorter and more defined waiting period than a domestic adoption. However, she said, “from the time you decide you’re going to adopt from Russia, you know you’re going to have issues different from a domestic adoption or if you give birth to the child.”

While no adoption is a 100 percent seamless transition for the parents or child, Krenson said, she and her family fortunately never had any psychological issues to contend with. If they had faced serious issues, “there are all sorts of resources to tap into” locally, she said. Their adoption agency “kept good tabs” with ongoing home visits for more than three years after their placement was finalized, she said.

Catholic Charities of Tennessee is one local agency that performs home studies, holds training classes and offers follow-up counseling to families adopting internationally. They are currently working with more than 250 families in all stages of the international adoption process.

Despite threats from the Russian government to halt all adoptions to the United States, “adoptions are slowly moving forward in Russia,” said Julie Bolles, international adoption coordinator at Catholic Charities Tennessee. They still could take years to complete, she added.

The majority of the time, the transition of adopted children into their new family “absolutely goes well,” according to Donna Thomas, director of Caring Choices, Catholic Charities’ adoption services program. But sometimes there are problems, she said.

“If a child has been institutionalized and has a history of abuse or trauma, regardless of their culture, they can have difficulty attaching and becoming integrated into the family,” Thomas said.

To help prepare families for life with their new child, Catholic Charities offers 10 hours of parent education classes, in addition to the home study process, which includes extensive interviews with the prospective adoptive families. If there are bonding or other issues after the adoption is finalized, Catholic Charities can help with follow-up services.

For the Middleton family of Our Lady of the Lake Parish in Hendersonville, adopting an older child was not something they set out to do but was the blessing that completed their family. “I felt like it was God” that led Vlad into the Middleton home, at first as a visiting orphan, then as a son, said his mother, Gina.

The Middletons hosted Vlad, then 10, when his Russian orphanage sent a group of children to visit Nashville in hopes of finding adoptive families for them. Six months later, Vlad’s adoption was finalized.

Vlad actually had an easier time adjusting to his new family than the Middletons’ second-oldest son, Jake, whom they adopted from Thailand when he was 4. Jake had lived with a foster family there and didn’t understand what was happening when the Middletons came to take him home. “He screamed and cried a lot in frustration,” Gina Middleton said.

The language barrier, of course, was also an issue. In anticipation of adopting Vlad, both Gina and her husband, Kevin, learned some Russian, and Vlad knew a little English. Growing up in an institution, Vlad, now 14, was eager to find his “forever family” and has such a pleasant disposition, she said, that “I think everyone in the world gets along with him.”

The Middletons also have one biological son, 17-year-old Cale. “We always wanted to adopt,” said Gina Middleton, since her husband was adopted and knows only his adoptive family.

Cale doesn’t see Jake and Vlad as adopted, “he just sees them as his brothers,” Middleton said. And she and her husband “don’t see them as our adopted children, they’re our children.”