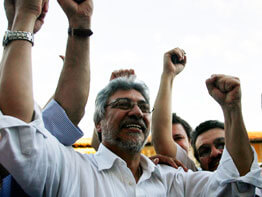 Bishop Lugo took an early lead in the pre-election polls, despite official disapproval from the Vatican and, initially, from the Paraguayan bishops’ conference. As support for Bishop Lugo remained strong in the largely Catholic country, the conference refrained from further comment.

Bishop Lugo, 58, retired from the Diocese of San Pedro in 2005. The Vatican suspended him from exercising his priestly ministry when he decided to run for president, but rejected his request for laicization after more than 30 years as a bishop and priest.

Although several media outlets reported that the Vatican could be considering a dispensation for Bishop Lugo, the apostolic nunciature in Paraguay said there had been no change in the retired bishop’s status.

A brief message dated April 14 and posted on the Web site of the bishops’ conference said that “the practice of the Holy See is to respond to events when they occur,” and that the church’s position “on the canonical situation and political-partisan activity of Bishop Fernando Lugo has not changed.”

However, the Italian news agency ANSA reported April 22 that Bishop Martinez said the bishops’ conference was willing to collaborate on a solution to the canonical problem.

Bishop Martinez said the bishops will work with Archbishop Orlando Antonini, papal nuncio to Paraguay, in a “process of reflection” that must take a verdict to Pope Benedict XVI before Aug. 15, when Bishop Lugo takes office for a five-year term, reported ANSA.

Passionist Father Ciro Benedettini, vice director of the Vatican’s press office, said April 21 and 22 that the Vatican will not be making any statements regarding Bishop Lugo.

Bishop Lugo won slightly more than 40 percent of the vote, edging out Colorado Party candidate Blanca Ovelar, who was jockeying to become the country’s first female president, and retired Gen. Lino Oviedo, former head of the armed forces, who was convicted, then acquitted of a 1996 coup attempt.

In Paraguay, unlike other Latin American countries, there is only one round of balloting, and the candidate with the simple majority is the winner.

At an outdoor celebration attended by thousands in Asuncion, Bishop Lugo told the crowd, “Democracy is something we do together”; he also said he hoped from now on Paraguay would be known “for honesty, not for corruption.”

Bishop Lugo, who campaigned on a platform of equality for Paraguay’s poor farmers and indigenous people, will take over a country slightly larger than Nebraska and South Dakota, with a population of about 6 million.

With a per capita income of about $1,400, landlocked Paraguay is also one of South America’s poorest nations. The service sector and agriculture are the largest employers, and more than 1 million people are estimated to have left the country in search of employment.

Ciudad del Este, on the border with Brazil, has a reputation as a haven for contraband smugglers and drug runners, and the country has been beset by corruption scandals. In 2001, it was revealed that then-President Luis Gonzalez Macchi’s presidential limousine was a car that had been stolen in Brazil and smuggled into Paraguay illegally.

Wedged between Brazil and Argentina, Paraguay shares river borders and hydroelectric dams with both. During the campaign, Bishop Lugo pledged to renegotiate Paraguay’s contract with Brazil for the Itaipu dam.

Under the current contract, which was negotiated when both countries were under military rule, Paraguay sells its excess electricity to Brazil at cost. Bishop Lugo has proposed increasing Paraguay’s share of the revenues by raising the price to market rates.

Bishop Lugo has expressed sympathy with the wave of left-leaning leaders who have taken office in Latin America in recent years, while keeping his distance from Mr. Chavez.