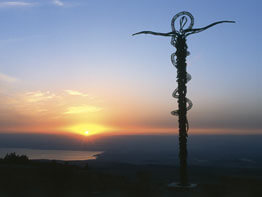 VATICAN CITY – Pope Benedict XVI’s planned trip to the Holy Land was slowly taking shape in February, and the tentative schedule included a number of important pastoral and interreligious events.

The proposed itinerary would take the pope to Jordan May 8-11, for a visit to the new King Hussein Mosque in Amman, meetings with Jordanian officials, a Mass for Catholics in a soccer stadium, a stop at Jesus’ baptism site at the Jordan River and a pilgrimage to Mount Nebo, where Moses once looked out at the Promised Land.

The pope would travel from Jordan to Israel May 11 and visit the Yad Vashem Holocaust memorial in Jerusalem the same day. Over the next three and a half days, he would visit the Western Wall, sacred to Jews; meet with Jewish and Muslim leaders; hold talks with Israeli and Palestinian leaders; visit a Palestinian refugee camp; and celebrate Mass in Bethlehem, Nazareth and Jerusalem.

Before returning to Rome May 15, the tentative schedule calls for the pope to hold a brief ecumenical encounter and visit the Church of the Holy Sepulcher. There was talk of a papal stop in war-devastated Gaza, but Vatican sources said there were no firm plans for such an event; instead, a delegation of Gaza residents was expected to attend one of the papal Masses.

The Vatican’s chief papal trip planner was expected to meet with local organizers in late February to work out a definitive schedule for the visit.

Meanwhile, Archbishop Antonio Franco, the Vatican nuncio to Israel and Palestinian territories, said the importance of the papal visit to the small Catholic community in the Holy Land should not be overlooked.

“The visit of the pope is that of the spiritual head of the Catholic community, and so he is coming to visit his children who are here, in Jordan and the Holy Land,” Archbishop Franco told the Italian news agency SIR.

“One hopes that everyone who wants to come will be able to breathe the atmosphere of peace that will surely be created during the visit, and to listen to a message of peace and reconciliation that can stimulate people to build a better world,” he said.